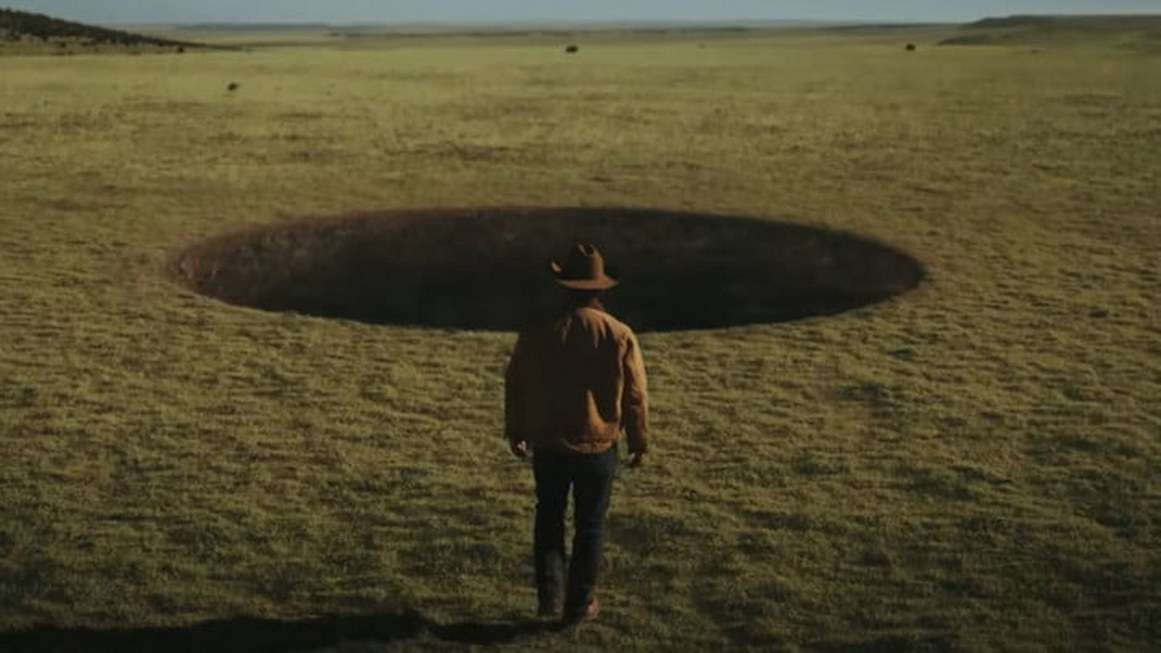 Outer Limits meets Twilight Zone on the Yellowstone ranch in Outer Range. For the first two episodes of Moon Knight, I had no idea what was going on but was mesmerized by the performance of Oscar Isaac and the promise of better times ahead. Through two episodes of AppleTV+’s Outer Range, I’m bummed by the darkness and see no path forward. With six more episodes to go through May 6th, are there reasons to give it more time? Even at a 70% Rotten Tomatoes rating, the Critics’ Consensus states “anything but plain, but its plethora of subplots threaten to get sucked into a wormhole of ponderousness.”

Neighbors that hate each other, animals and birds acting strangely, a trust-fund hippie, and a large, perfectly round, deep hole in the ground form the backdrop for Outer Range. Then, add my favorite, time gaps. Help, let me out of the Outer Range! Before I completely escape, the series opens with a reference to the Greek god Chronos who, we are told, cut a hole in the cosmos between heaven and Earth. He is the personification of time, literally Father Time.

The Abbotts got title to their cattle ranch in 1878. Now, Royal and Cecilia Abbott live with their two sons, Perry and Rhett, and granddaughter, Amy. At this point unknown is the reason for the disappearance of Perry’s wife, Rebecca, missing now some nine months. Two missing cows and a low rumble in the western pasture causes Royal to investigate. Oddly, he tells no one about the hole. At this point, Outer Range gets no more than 2.5 Gavels although I note audience approval at a 7.8/10 IMDb score.

Autumn Rivers wants to camp on the Abbott ranch. Royal refuses until she flashes a wad of cash. Later, she will reward him by pushing him into the hole. The neighbors, the hated Tillersons, demand 600 acres of the Abbott ranch due to a surveying error over 100 years ago. A fight between Trevor Tillerson and Perry Abbott ends tragically. To hide the evidence, Royal discards the body in the hole, only to find Autumn in the darkness. No one is more surprised than Autumn that Royal is still alive. “What did you see in there?” And then, Outer Range really gets strange!

From Avengers to Sicario, what’s not to love about Josh Brolin? He’s properly mysterious and blasphemous in his role as Royal, but will that save the show? Lili Taylor (Perry Mason) gets second billing as Cecilia but given little to do in the first two episodes. Does Imogen Poots (Autumn) have some sort of special connection with Chronos and the hole? Should I care?

The final scene of episode two finds Royal back at the hole, with floodlights and oil riggings adjacent, and folks all around. As a man yells “maintain your vectors of fire,” Cecilia tells Royal “you died two years ago; this is not our land anymore. Run!” And, that makes about as much sense as the rest of what I saw.

“By the end of eight frustrating and haphazardly paced episodes, exhaustion sets in.” Guardian

If the Brits don’t care for Outer Range, that settles it. All in all, there’s lots more to explore elsewhere.