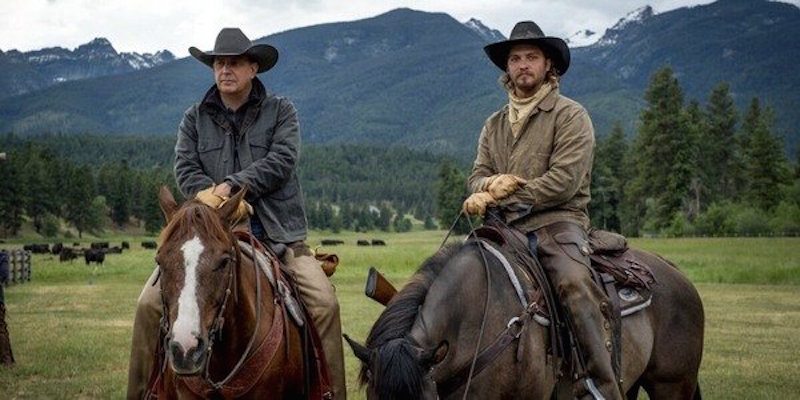 Some may try to tell you that Yellowstone is Kevin Costner’s (The Art of Racing in the Rain) show. Don’t believe it. He is merely carrying the water for Kelly Reilly, his hell-raising, take no prisoners, daughter. John Dutton’s sons may disappoint him, but never Beth Dutton. For an English actress, she makes one heck of a cowgirl. Winding up season three on the Paramount Network, Montana and Utah provide the scenery for this sprawling series. Seven generations of Duttons lived on the largest ranch in America set adjacent to Yellowstone National Park. John will not cede one square foot to developers for casinos, subdivisions, or this year, airport and ski resort.

Paramount advertises Yellowstone as the best show on summer TV. Understanding the limited competition, I agree. Nevertheless, Costner and Company keep the action coming, often violently. As the women take an even more prominent role, this year brings us the daughters of Micheal Landon (Jennifer as Teeter) and Josh Brolin (Eden as Mia). I give Yellowstone 4.0 Gavels and it earns a very good 8.4/10 IMDB rating.

Hot off the killing of six for kidnapping his grandson in season two, John resigns as livestock commissioner. Just as he is ready to step back and enjoy life, Beth discovers that developers want a huge swath of the ranch for an airport. They want Governor Lynelle Perry, occasional lover of John, to use eminent domain, if necessary. John, Beth, Kayce and Wes Dutton know the savagery of the wilderness. But, can they fend off big city money one more time?

An Academy Award winner in Dances With Wolves, is anyone more comfortable out West than Kevin Costner (John Dutton)? This is his comfort zone. A winner of Laurence Olivier Award in 2003, Kelly Reilly is certainly no slouch. As Beth, from the first episode, you knew she would be an unforgettable character. Luke Grimes portrays the reticent, war-hero son Kayce, married to Native American, Monica. Wes Bentley is the weak-willed, attorney son, Jamie, always out of favor with his dad.

Don’t mess with Texas and don’t mess with the Duttons! For example, Beth gives advice on to how to avoid repetitive domestic abuse. “I got a new boyfriend and a big ashtray.” Season three provides a touching scene as John explains to grandson, Tate, the perils of ranching.

The Age declares “the series recently moved smoothly into its third season… This is a surprisingly overlooked gem. I’m hooked.” Likewise, Entertainment Voice writes “Yellowstone, like many good westerns, combines gritty action with the dreamy landscapes of America’s lush frontiers. Yet in its subtexts it also has a few notable ideas.”

By and large, the writings of Taylor Sheridan are well known, witness: Sicario, Hell or High Water, and Wind River. In short, his work in Yellowstone will not disappoint.