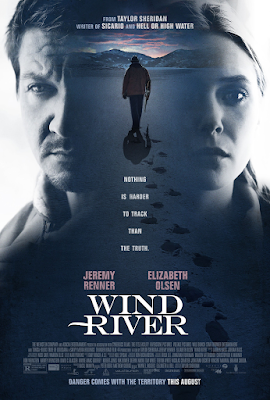 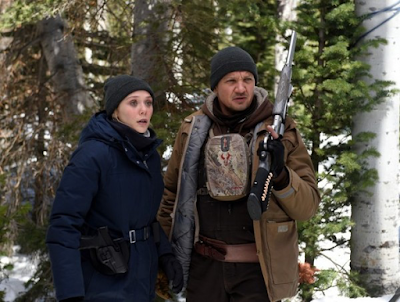 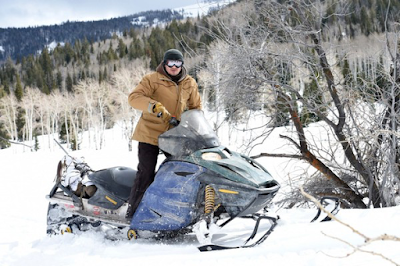 Sicario, Hell or High Water, and now Wind River.  Writer, now director, Taylor Sheridan is on one heck of a roll.  Rarely does a movie combine such a great story with equally good actors and even better scenery.  Wind River is a real place in Wyoming and the stark winter landscape works its harsh magic on this murder thriller.  The Wind River Reservation is as big as Rhode Island but only policed by seven officers.  My only concern for those of you that wait to see this on the small screen is whether or not it will do justice to the vastness of this magnificent area.

Wind River opens with a young girl running barefoot across the frozen wilderness, obviously in great fear, and ultimately to her death.  We are next introduced to Cory Lambert, a US Fish and Wildlife agent, who knows Wind River quite well as a tracker, and former husband to a Native American. Young, naive FBI agent, Jane Banner seeks Lambert’s help in finding out what happened to the girl. Tribal Police Chief Ben tells Jane “this is not the land of back-up; this is the land of do it alone.” Lambert’s history with the people, and his own family, drive his character to get involved even though he has no jurisdiction.

Most of you will remember that I thought Jeff Bridges should have received an Oscar for his role in Hell or High Water (see my review of 1/29/17).  Jeremy Renner is that good in this role as Cory Lambert.  In this role, he reminds you of Steve McQueen.  As his character says, in Wind River, you either surrender or survive.  Elizabeth Olsen is solid as the wide-eyed inexperienced FBI agent.  You have seen Graham Greene in virtually every Native American movie; he never breaks character as the Police Chief who has worked against overwhelming odds all his life.  Gil Birmingham, as the deceased girl’s father, is also a regular in Native American movies, and gives a memorable performance.

I assume most of you are aware of the many issues on reservations, including alcohol and drug use, unemployment and poverty.  This film addresses additional problems of missing and murdered girls.
Sheridan offers no answers, but recognizes that society must address this sooner, rather than later. This is a drama, but it does not movie become preachy.  The director takes you on the ride that one could easily believe was based on a true story.  While a murder can never have a “good” ending, I think most of you will find this movie to have a slightly different, but ultimately satisfactory one.  If you can’t get to the theater (and this movie has been out for awhile), get your pencils out!