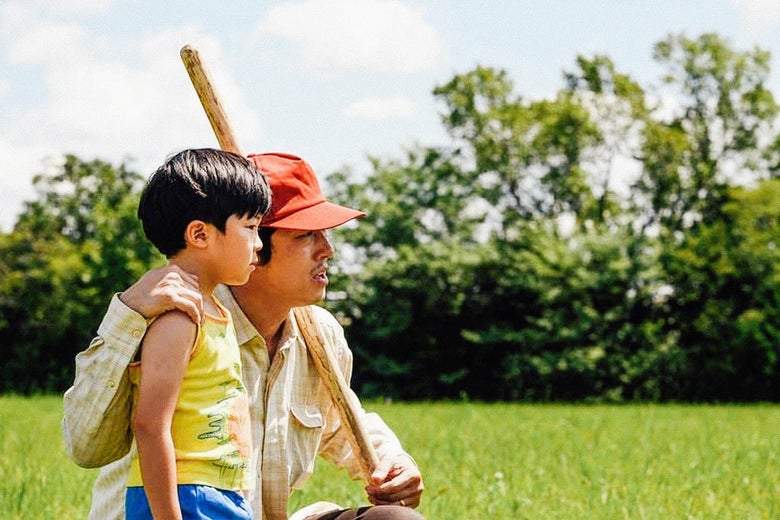 As I am watching Minari, I keep wondering what I am missing in this Oscar Best Picture nominated film. Two hundred eighty seven critics on Rotten Tomatoes liked this movie and I’m having trouble staying awake. What they see as the immigrant struggle to succeed in America, I see as everyday life on a farm. Is it because I grew up in the country and therefore have a different perspective than city folk? Only six of the critics agree with me and this one sums it up best:

“Basically, a home movie with superb production values and fine acting. Unfortunately, its focus is too narrow to be of much interest.” Counterpunch.org

Digging holes, sexing chickens, and planting a garden is interesting for about thirty seconds. After that, it just becomes mundane, whether you are Korean, American, or German. Again, it may just be me, but Minari portrays those in the Ozarks as backward, religious, hillbillies. Granted, I’ve never spent a lot of time in Arkansas, but it seems pretty stereotypical. If the Koreans were presented in that fashion, I would expect howls of dismay from their representatives. In any case, Minari has come down from its original streaming price of $19.99 to $5.99 on Amazon Prime and other services. If interested, I’d wait a while longer until no premium cost is required. I give Minari 3.0 Gavels and it receives a 7.5/10 IMDb score.

“In California, we had nothing. Now, we have a piece of land.” Jacob and Monica want a better life, but moving to the middle of nowhere is not what Monica had in mind. Young David has a heart condition. Will proper medical care be available close by? Jacob is certain this 50 acres will free them from the drudgery of chicken sexing within three years. They need help so why not bring Monica’s mother over from Korea? David thinks Grandma smells. And, why doesn’t she bake cookies? Grandmas shouldn’t swear. Life on the farm begins to take its toll on this married couple.

By now, you probably know that Grandma aka Youn Yuh-jung won the Oscar for Best Actress and fulfilled her dream of meeting Brad Pitt. The growing relationship of David and Grandma is the reason to watch. David likes Mountain Dew; Grandma enjoys a little of that “mountain water,” too. Will Patton (Yellowstone, Megan Levey) is a long time favorite actor of mine. Here, he appears as Paul, a neighbor hired by Jacob to assist on the farm. Still, other than to overact as one of those bumbling, half-witted, God-fearing Ozarkians, there seems to be little reason for his character. Is there such a thing as an exorcism of the land?

Since I am so far into the minority, let’s see what the experts have to say:

“Everybody’s talking about this unassuming, but also unmissable and unforgettable slice of Korean-American life and for good reason: Lee Isaac Chung’s heartfelt memoir is the best movie you’ll find anywhere about what it means to be a family.” ABC News

In the end, like Hillbilly Elegy, I don’t find these tales of family struggles all that fun to watch. Ultimately, the messages of family and hope are too little, too late. After so much pain, are they real? Especially for Monica, her transformation into acceptance of this foreign land feels much too quick. Can her faith in Jacob really be restored overnight?