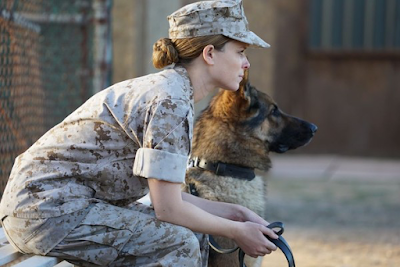 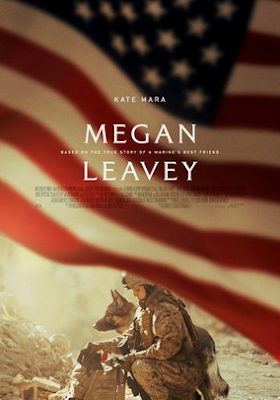 Baseball, war dogs, apple pie and Chevrolet!  Those of a certain age will remember that slightly modified TV ad from years ago.  This movie may not have had a prominent Chevrolet, but everything else made for a good, sentimental movie based on fact.   If you want to know the real story, google History vs Hollywood-Megan Leavey.  Suffice it to say, they took some liberties but it is mostly true.

Megan (Kate Mara-House of Cards) decides to enlist in the Marines as she no longer fits in with her mother (Edie Falco-The Sopranos) and her boyfriend (Will Patton-Falling Skies).  After getting in trouble, she is assigned to clean the dog kennel and decides she wants to be a dog handler.  She is assigned to Rex and the movie shows the training and deployment to Iraq.  After numerous successful missions, she and the dog are injured.  The latter part of the movie centers on her attempts to adopt the dog and the difficulties presented.

The best actor in the movie might well be Rex, but Common (John Wick 2) as the Gunnery Sgt. and Ramon Rodriguez as a love interest and fellow dog handler are worth watching.  Bradley Whitford (most recently of Get Out) has a small part as Megan’s father.

While clearly very brave, Megan is not always portrayed as people-friendly.  But she is fiercely loyal to her dog and, alas, to the New York Yankees.  If you like animals and a mostly-friendly military movie, you will like this one. As one critic noted its Hallmark flavor (I say apple pie), my reply is that I like the Hallmark Hall of Fame movies.  Dog lovers might want to take some tissues along just in case.  This is not a great script but it is a good story.