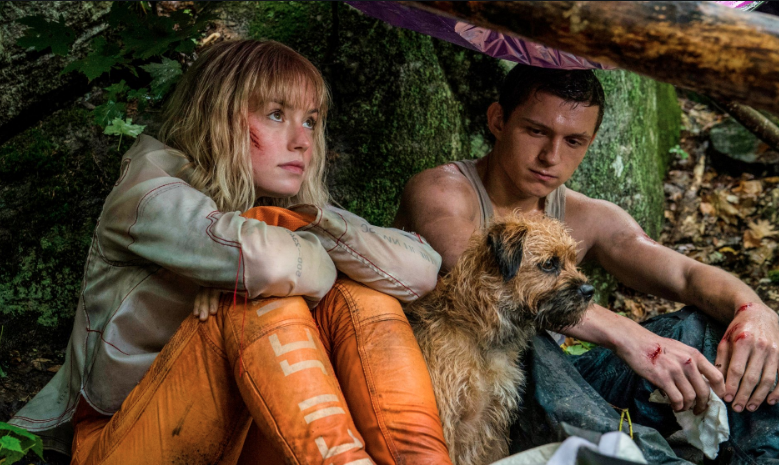 Feeling sorry for Chaos Walking, I dropped $5.99 plus tax to bail out a film that cost $100 million and only grossed $27 million. Why? Could a film starring Tom Holland (Spider-Man), Daisy Ridley (Star Wars), Mads Mikkelsen (Riders of Justice), Demian Bichir (Land), Nick Jonas (Dash and Lily), Cynthia Erivo (Harriet) and David Oyelowo (The Midnight Sky) be as bad as their collective 29% Rotten Tomatoes rating? Once again, I note the Audience score sits at 71%. Their movies have made billions. Moreover, the Chaos Walking trilogy is a winner of “almost every major children’s fiction award.” Interestingly, the writers make significant changes from the book. Further, critics never like a film which undergo major re-shoots.

Set in 2257 A.D., it takes 64 years to get to The New World from Earth. For some unknown reason, every man suffers from The Noise. Others hear his thoughts through a series of images, words and sounds. Women are not so afflicted. The film begins “the noise is just a man’s thoughts unfiltered, and without a filter, a man is just chaos walking.” One man, Mayor Prentiss, is able to hide his thoughts better than the others. Now, with all the women dead, Todd Hewett is the youngest male still alive. His mother, killed shortly after his birth, Todd has never seen a woman. With the arrival of Viola, his life is about to be upended, as is the entire village of Prentisstown. The Noise, presented annoyingly, brings Chaos Walking down to 3.0 Gavels. Its IMDb score sits at 5.8/10.

The Second Wave, with some 4,000 more settlers, was to arrive years ago. Sent ahead, Viola’s scout craft crashes and she is the sole survivor. Awaiting the mother ship, Viola steals from Todd’s farm. While trying to keep her location secret, his thoughts betray him to Mayor Prentiss. Prentiss captures Viola and demands to know when and where her ship will land. Since the occupants will be in hyper-sleep, they will be easily overcome and weapons taken. Prentiss intends to rule The New World, including the native species, Spackle. Why did the Spackle only kill the women? Todd doesn’t ask questions but knows he must assist Viola.

Since there will never be a sequel to Chaos Walking, do you think Tom Holland (Todd) ever gets a kiss from Daisy Ridley (Viola)? Would your wife reading your mind drive you insane? Who says they don’t already know our thoughts, predictable creatures that we are? Did Mads Mikkelsen (Mayor Prentiss) happily die so he wouldn’t have to be in any sequel? Is this David Oyelowo’s (Preacher Aaron) most forgettable performance ever? So many questions, so few answers.

If the third book was praised for its handling of the unclear distinction between good and evil, why don’t we see that in the film. Evil rings out clear as a bell in Chaos Walking. Daisy Ridley, so confident in Star Wars, seems strangely muted and confused as Viola. Perhaps she is just the strong, silent type? Anyone else think the monorail supports seem wholly out of place for a society on horseback?

“Holland and Ridley have all the rapport of two tree trunks, and the deeper dramatic and comedic possibilities of the one-way torrent of intimate thoughts between them goes bafflingly unexplored.” The Telegraph (UK)

“You keep hoping a giant thought bubble will fly out of the bushes and whack someone over the head.” New York Magazine/Vulture

I could have found something nice to say about Chaos Walking, but those were too good to pass up. In conclusion, a sound idea, poorly executed.