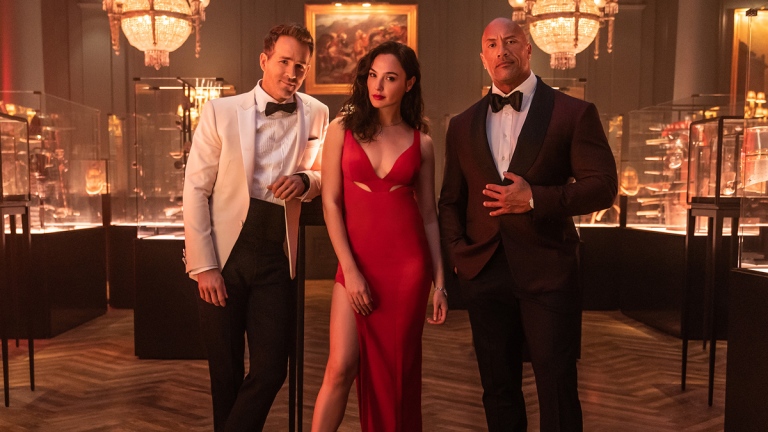 Deja Vu would be a much better name for Red Notice. Russian prison escape, already done. Searching for lost jewels in South America, check. Hideout in Bali, c’mon. For $200 million, this is all you get? Netflix overpaid and then some. Reportedly, Dwayne Johnson (Jungle Cruise) and Gal Gadot (Wonder Woman 1984) each received $20 million. Maybe that’s why Ryan Reynolds (Free Guy) seems a subdued version of his usual self. Did he think himself underpaid? His character, Nolan Booth, works alone. For him, there is no team in teamwork. That character flaw precludes any chemistry between Johnson and Reynolds. For a “buddy” film, that is fatal.

Red Notice gives the viewer a trip around the world, from Rome and Russia, Bali and London, to Valencia and Argentina. And, what actors are more in demand than Johnson, Gadot, and Reynolds? Rawson Marshall Thurber wrote and directed Johnson in Central Intelligence (71% Rotten Tomatoes) and Skyscraper (48% Rotten Tomatoes). So, he has the pedigree even if he’s on a downward trend. Red Notice tries to gin up the action, but it’s all too familiar, and not in a good way. Understandably, the critics are not happy giving the film a poor 39% Rotten Tomatoes rating. At a 6.6/10 IMDb score, viewers are similarly unimpressed. Disappointed, very disappointed, the best I can give Red Notice is 3.0 Gavels.

FBI profiler John Hartley receives credible information that the most wanted art thief in the world, Nolan Booth, is about to steal one of the bejeweled eggs given to Cleopatra, now residing in a Rome Museum. Working with Inspector Das, they shut down all exits, but Booth narrowly manages to escape. Hartley’s source, the Bishop, lets them know about Booth’s hideout in Bali, where they intercept him and recover the egg. In a double cross, the Bishop steals the egg from Hartley and frames him for the theft by depositing $8,000,000 in his account. In prison, Hartley makes a deal with Booth. Help him clear his name and Booth can once again be the most wanted.

Johnson is Hartley, Reynolds is Booth, and Gadot is the Bishop. I can’t remember the last time three such highly entertaining actors had such dissonance. The film tries to set up a sequel but I’ll be darned if I think of a reason why. The viewer now knows the twist, Reynolds is a third-wheel, and the audience wants something new, not a re-tread. Other than the big three, the only character of any note is Inspector Das, acted by Rita Aryu. You saw her in Last Christmas, not last Christmas, but Christmas 2019. She is the Interpol agent who issues the Red Notice.

Funny thing about the Red Notice is that it plays such a miniscule part of the movie. Rather than a worldwide chase of the worst of the worst, the flick is more about con men and double-crosses, sort of bait-and-switch. In the final analysis, re-watch any Bond film, Mission Impossible movie, or Indiana Jones picture for a better time.

“Uninterested in world building or creating any sense of stakes, Red Notice is merely an expensive brandishing of star power – only the stars haven’t got it in them.” New York Times

“You can have The Rock, Wonder Woman, and Deadpool, but it doesn’t mean much if they don’t have clever things to say and meaningful things to do.” ReelViews

Because it’s on Netflix and you’ve already paid for it, you’re gonna’ watch it from the comfort of your couch. Pop some popcorn and/or grab a glass of wine. At least then you will have something enjoyable.