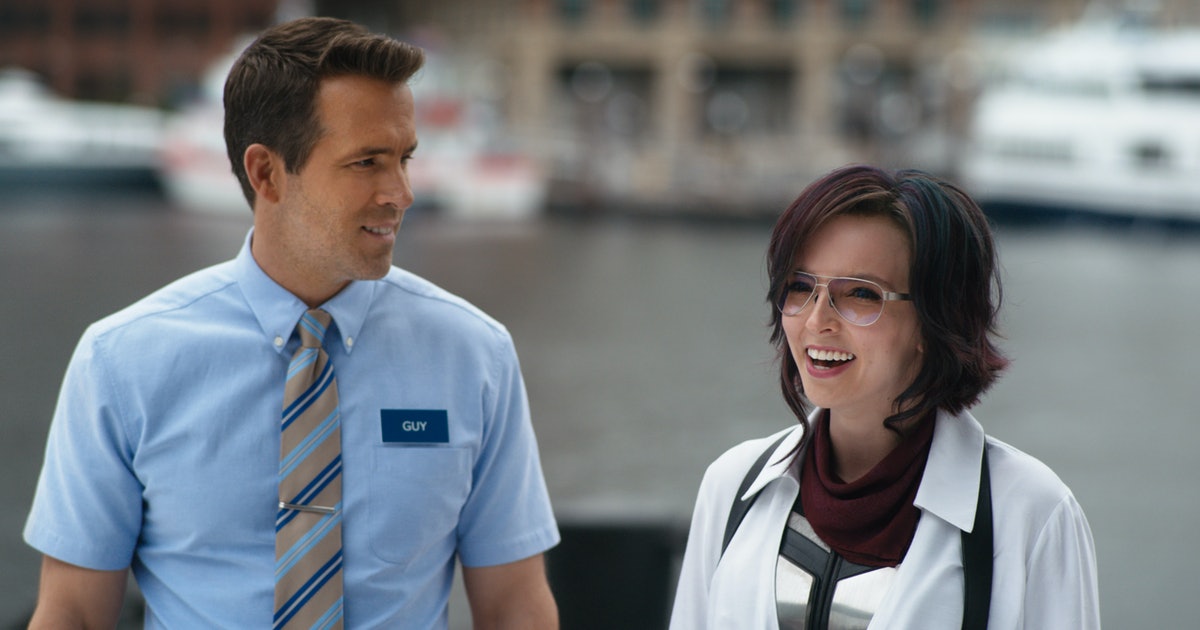 Clearly, the target audience for Free Guy are the gamers. Yet, those of us who haven’t touched a video game in 30 years can appreciate the silly cleverness of Ryan Reynolds and company. For years, movie studios brought video game characters (Sonic, Tomb Raider) to life with varying degrees of success. But, those were the stars. What about the NPCs, the non-player characters who become collateral damage? And, what if one of those non-descript NPCs broke ranks and decided to become a main character? Such is the premise of a science fiction action comedy that, at times, becomes very thoughtful and, dare I say, sweet.

We all know of Ryan Reynolds‘ dedication to Deadpool. It seems his immersion spilled over to Free Guy. Would this film receive a $100 million budget if not for the Disney purchase of Twentieth Century Fox? As a sort of film within a film, the viewer acquaints himself with characters within the game and the creators of the game. The NPCs are given souls and dreams. Free Guy wants more from “life.” Not just geeks and nerds, the creators pour their hearts and lives into these animations. To them, is Free Guy a nuisance or a marvel? If AI could learn on its own, would it become a good guy or a bad guy? All Blue Shirt Guy knows is violence. Is he predestined to follow that mold? I give Free Guy 4.0 Gavels and it receives an 84% Rotten Tomatoes rating with a 7.7/10 IMDb score.

Guy wakes up everyday to the same coffee, the same bank job, and the same repetitive robberies. To his friend, Buddy, he confesses his dream of the perfect woman. Those who wear sunglasses possess powers. They don’t mix with the likes of Guy and Buddy. When Guy bumps into Molotov Girl, he decides he must try something different, no matter the risk. Interrupting a robbery, Guy obtains sunglasses and, for the first time, “sees” a whole new world. However, understanding it will take a lot longer.

The gift of Ryan Reynolds (Hitman’s Wife’s Bodyguard) is to make the ridiculous believable. He is right in his element as Guy. After Killing Eve, who else would you put in a violent video game but Jodie Comer. Except Millie/Molotov Girl brings out a much “softer” side of her. Just don’t expect her to play the complete innocent. Although seen in Molly’s Game, Joe Keery gets a major role here as Millie’s “partner.” For him, does life imitate art?

“Don’t have a good day. Have a great day.” Such is Guy’s signature phrase. His glass is always 90% full. Be careful not to miss the social commentary on guns and violence in the video and real worlds. For Hollywood, its as “tasteful” as it can get. As you might expect in a video game, the viewer gets his due with explosions and crashes. Unexpectedly, you also get a light saber, Chris Evans and Alex Trebek.

“Everybody, from stars Ryan Reynolds and Jodie Comer to terrifically effective art department and camera crews, brings their A-game to this uplifting tale about artificial people discovering their humanity.” San Francisco Chronicle

“Free Guy is a big, warm hug of a movie with plenty to love, even if you’re not super into bubble gum ice cream, swing sets and vintage Mariah Carey like Ryan Reynolds’ goodhearted title character.” USA Today

After viewing the trailer, I really didn’t know what to expect. Realistically, one could watch Free Guy numerous times and still not find all the Easter Eggs. It’s not likely to make near the money of Deadpool, but Reynolds does himself proud. Go for it!