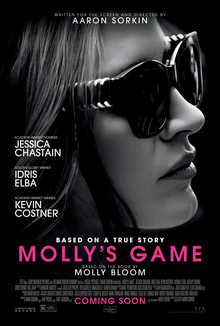 West Wing and Studio 60 fans will be happy to know that Aaron Sorkin is alive and well.  With rapid-fire repartee, this movie is reminiscent of The Big Short; you didn’t always know what was going on but you sure enjoyed the ride.  While The Darkest Hour was a must-see for history buffs, this is a must-see for aficionados of poker.  But it is more than that.  Molly’s father was a psychologist, Molly was a world-class skier, the poker participants were actors, wealthy businessmen, sports figures and . . . mobsters.  And to top it off, bring in the lawyers.  All in all, it is a rousing good story, a true story, i.e., the best kind.

Asked if her father pushed her too hard, Molly replies, “Name me one Olympic athlete whose father didn’t.”  As she was about to make the Olympic team, a freak accident ruined her chance.  Accepted to Harvard Law,  Molly decides to take a year off.  She becomes a manager of poker games, but is mistreated by her boss.  Deciding to steal his game, Molly eventually earns $4 million/year, but ends up on the radar of the Justice Department.  They raid her house, confiscate her assets, attach IRS liens, and indict her, all to get her to roll over on the other 31 defendants.  She needs a lawyer, but will he be able to keep her out of prison?  Will he be able to keep her alive?

Jessica Chastain as Molly is an absolute delight in this flick, perfectly cast.  She is nobody’s fool.  As a woman in a very powerful man’s world, she is able to juggle all sorts of different roles, yet thrive.  The back and forth with Idris Elba, her capable lawyer raising a bright daughter of his own, is one of many treats.  Kevin Costner, as her overbearing father, is easy to hate, but the scene at the Rockefeller skating rink at the end of the movie was just right.  Michael Cera is Player X, the actor who initially attracts the competition.  Chris O’Dowd, as Douglas, is the sad sack who causes the cards to collapse.

For all the recent sexual harassment talk, Molly’s Game is the real life version.  Men with money have power; they try to take advantage of you.  Molly fights back over and over, sometimes she wins, sometimes she doesn’t.  Lest you think otherwise, this is no Pretty Woman glamorizing prostitution, or in this case, gambling.  Molly Bloom shows the underbelly of this life, along with the glitz.  While I won’t divulge the specifics, remember that mobsters are involved in this tale.  Absolutely, this movie is worth going out in the minus 20 wind chill to see.  Will it get nominated for an Oscar?  I haven’t seen The Post and I, Tonya but it’s as good as Three Billboards Outside Ebbing Missouri, slightly better than The Greatest Showman and Lady Bird, and much better than Dunkirk, Get Out, and The Shape of Water.  Don’t even get me started on The Disaster Artist.  Golden Globes are this Sunday.