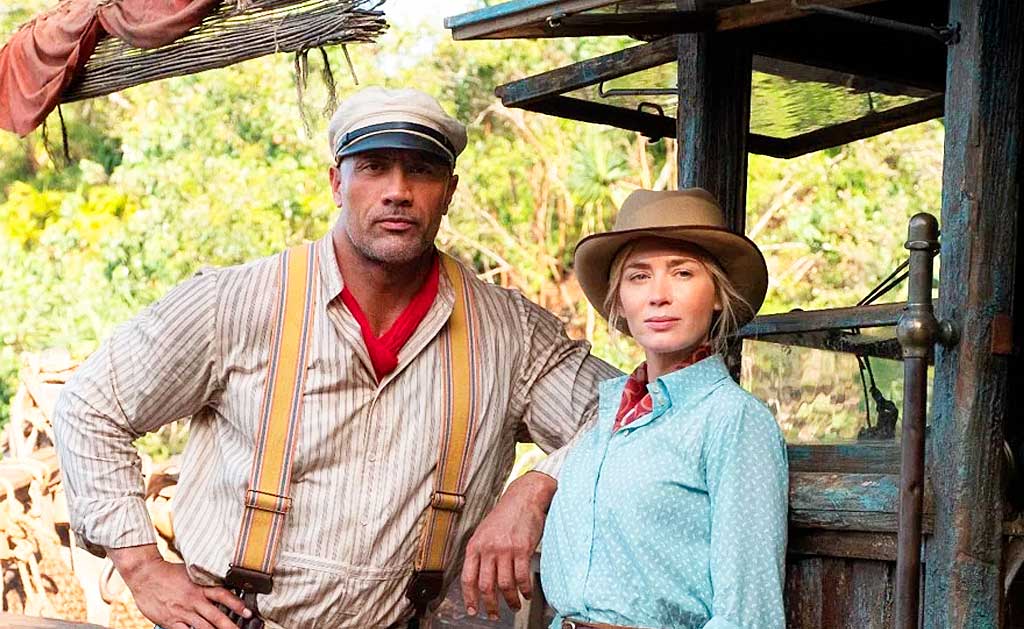 Find snakes, spiders, tarantulas, and puns galore in Disney’s Jungle Cruise. Does one of those seem out of place? It’s been years since Disney announced its intention to make this filmed based upon the theme park ride. For all that time, this is the best they could do? Of all the recent Disney films, Jungle Cruise may be my least favorite story. Start with a ride that feels like you are in Disneyland, steal a little from Pirates of the Caribbean, rob a bit from Raiders of the Lost Ark, and you get the feeling that the writers struggled to come up with anything new. If Wall Street and theater owners weren’t happy with the return on Black Widow, the sparsely attended opening night at AMC is not likely to make them any happier.

What is is about the puns? Apparently, Frank has an uncontrollable urge to pun. Most of them are solid, even if overly familiar. Similarly, the same may be said of the stunts. How many times are we going to see a female hanging on a ladder outside a window? Most of the boat stunts defy the laws of physics so they appear “unnatural.” Even the mighty Amazon looks more like the overgrown portions of the Little Miami River. All that said, Jungle Cruise is one of those films where the lead actors play off each other well and look like they are having a blast. And you can never go wrong with a pet cat, a really big pet cat. Overall, I give Jungle Cruise 3.5 Gavels and it receives a 64% Rotten Tomatoes rating with a 7.0/10 IMDb score.

Legend has it that deep in the Brazilian jungle is a tree whose flower heals all fevers, cures all ailments. As a female in the early 1900’s London, no one takes Dr. Lily Houghton’s research seriously, nor will they fund her proposed expedition. Off she goes with brother, McGregor, to the wilds of the Amazon in search of a skipper. She might have an enemy on her tail, one Prince Joachim, since she stole the key to locating the tree. Captain Frank Wolff is about to lose his livelihood to competitor, Nilo Nemolato, until he sees his mark. Others may be easily fooled, but not the determined Lily.

Earlier this year, Dwayne Johnson (Jumanji, Hobbs and Shaw) gets the moniker Most Likeable Person in the World. Can Emily Blunt (Mary Poppins Returns, Wild Mountain Thyme) be far behind? As Skippy (Frank) and Pants (Lily), they share a romance across the ages, certain to make John Krasinski jealous. Seriously, they are the reason to tune in. Jesse Plemons (Judas and the Black Messiah) is way over-the-top as the evil Prince. The same might be said of Paul Giamatti (Gunpowder Milkshake) as Nilo, in a bit part.

“Everything you see wants to kill you and it can,” is the signature line of Jungle Cruise. Maggots, worms, and all sorts of bugs will attest to that. Jungle Cruise never quite explains how you get a submarine that deep in the Amazon, nor how Joachim controls bees. I guess some things we take on faith.

“Ms. Blunt seems to be having fun playing a distaff version of Indiana Jones. Mr. Johnson is always the same, but being able to be yourself is exactly what separates mere movie actors from movie stars.” Wall Street Journal

“Like a zanier Bogie and Bacall, Johnson and Blunt cross an ‘African Queen’ vibe with Indiana Jones flair for a period piece that starts like gangbusters but can’t keep from wading into familiar waters.” USA Today

Some critics say Jungle Cruise compares unfairly with The Mummy. As I say, lots of comparisons, little in originality. Still, for those who have short, or no, memory, Jungle Cruise will please. For most, it will be like a repeat theme park ride. The second time is never quite as good.