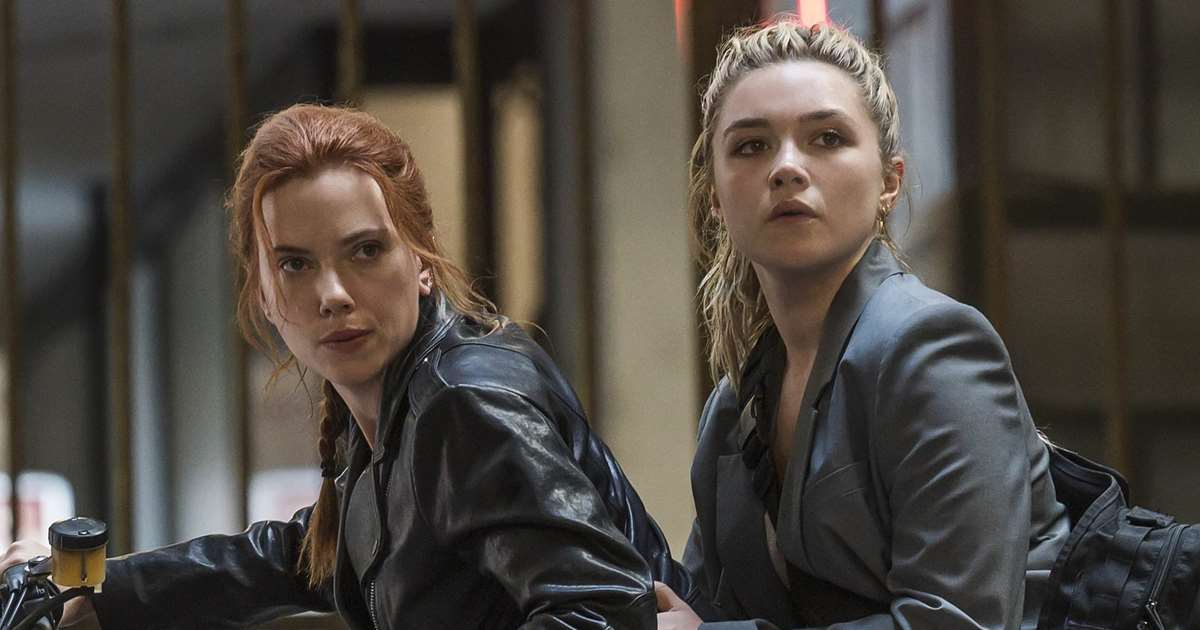 Black Widow is a worthy member of the Avengers “family.” Yet, this is no one-woman film. Arguably, “family” members Yelena and Alexei have an even better story. At the very least, they get the better lines. Since nearly everyone in the movie is either a Black Widow or a super-soldier, the fight scenes are Avenger-quality. And, I might say, the stunts may be Avenger-quality plus. In the end, you come for the story. Just how did Natasha Romanoff become Black Widow and an Avenger? It seems it all starts in . . . Ohio.

Of course, like any $200 million budget film, the viewer also travels to Cuba, Morocco, Norway, Budapest, and beyond. Nevermind mere motorcycle, car, and armored vehicle chases, you also get helicopters, vertical take-off planes, weapons of all sorts and a better-than-Bond avalanche. The director spares no expense. Unlike many an overcrowded Avengers film, Black Widow remains on focus on just Natasha, Yelena, Alexei, and Melina. One or more is in virtually every scene. Remember those years when the Russians were our friends, and while maybe a bit shady, they were at least helpful. No more! Tell us more about the Red Room, the evil Dreykov, and the Taskmaster. I give Black Widow 4.0 Gavels and it receives an 81% Rotten Tomatoes rating with a 7.4/10 IMDb score.

Set after Captain America: Civil War, the Sokovia Accords has Natasha on the run. Hiding, she receives vials and a picture of herself and sister, Yelena, as children. She hasn’t seen her sister in 21 years and has no reason to trust her. A tense meeting convinces Natasha that the man who tore them from their family is both still alive and a threat to the world. To find him will require the assistance of their “father” (Alexei) and “mother” (Melina). When last seen, Alexei was a close associate of Dreykov and Melina was on her deathbed. Is this a dead end?

To her credit, Scarlett Johansson (Natasha) allows her co-stars to shine. Ultimately, as expected, she gets in her fair share of kicks and punches. Florence Pugh (Yelena) first came to the attention of most in The Little Drummer Girl, followed quickly by Fighting With My Family. After this performance, it will be a shock if she doesn’t get her own spin-off. At 6’3″, David Harbour (Alexei) towers over Johansson and Pugh. His bombastic Red Guardian is a great contrast from his more serious trained assassin daughters. Rachel Weisz completes our family as Melina. It’s been awhile since we last saw her in The Favourite. All four were well-cast.

Black Widow opens in 1995, then jumps 21 years into the future. In so doing, the early scenes may leave the audience in some state of confusion. Rest assured, it all gets explained. As a former member of the KGB, does Vladimir Putin still have a Black Widow/Red Sparrow-type program? By mentioning this, am I about to get a visit from Russian hackers?

“The movie’s vibe isn’t like your average MCU entry at all, really. What it reminded me of are the many James Bond films where 007 goes rogue and cavorts around world cities seeking his revenge du jour.” New York Post

“It’s worth seeing on a big screen, not just once but twice.” San Jose Mercury News

I estimate that the large IMAX theater at AMC was at least 85% full, including lots of families with young boys and girls. Hopefully this bodes well for theaters and Disney. Surprisingly, we only sat through three trailers, Jungle Cruise, G.I. Joe: Snake Eyes, and The Eternals. Then again, we waited at least five minutes for the post-credit scenes. Whoever thought that was a good idea? A boo and a hiss for him/her.