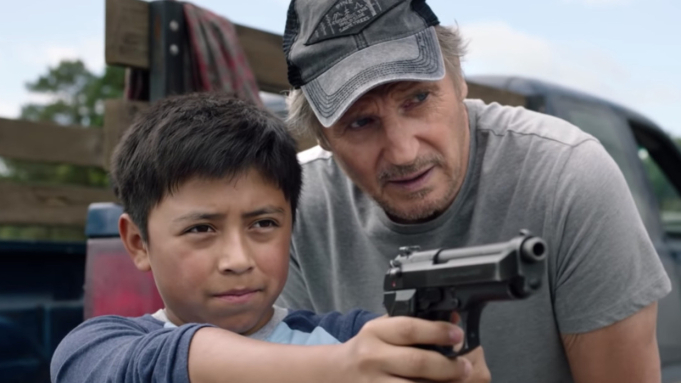 As you read the summary of The Marksman, you think the film is a bit of Rambo: Last Blood with a dash of The Mule. Of course, assassins for the Vasquez Cartel have a certain set of skills, but they are no match for a Marine. Especially, when the decorated Vietman War veteran is Liam Neeson, now 68 years old. Asking how long Neeson will be able to continue to be an action hero is like asking the same of Arnold Schwarzenegger or Sylvester Stallone. Neeson’s next action flick, The Ice Road, co-starring Laurence Fishbourne, comes out June 25th on Netflix. In any case, after the Taken series, The Commuter, Cold Pursuit, and Honest Thief, is Neeson in danger of being typecast? Certainly, and keep those checks rolling in! But, I digress.

Filmed in and around Cleveland and New Mexico per The Cinemaholic, The Marksman provides plenty of action, tense moments, and the bonding of this gruff Marine a Mexican boy whose life is on the line. The last thing Jim Hanson wants to do is babysit a kid to Chicago, but he is a man who fulfills his promises. No doubt, the drug money might save his ranch, but is it worth it? After watching The Whole Truth and Baggio, The Marksman is a virtual Oscar contender. In all seriousness, it is much better than its 36% Rotten Tomatoes rating. But, to show the range of opinion, the Audience score is 84% while the IMDb score is 5.6/10. That pretty much runs the gamut. I give The Marksman 3.5 Gavels.

Jim Hanson is still grieving his wife’s death, now gone for one year. Her medical bills put him behind and the bank gives him a 90 day notice of sale at auction. Located on the border with Mexico, his ranch is a conduit for the cartel running drugs, people, and guns into the U.S. His stepdaughter, Sarah Pennington, a border patrol agent, worries about his safety. Carlos makes the fatal mistake of stealing from the cartel. Mauricio gets the order to send a message by killing Carlos’ sister, Rosa, and her son, Miguel. As they try to escape Mexico, they cross paths with Jim Hanson. Lots of innocents will die before this one is put to bed.

Besides Neesom as Jim Hanson, Vikings fans will immediately recognize Lagertha, aka Kathryn Winnick as Sarah. Sadly, her part is rather small, unable to use those skills she wielded so well one thousand years ago. Seen in Peppermint and Operation Entebbe, Juan Pablo Raba has the look of a bad guy. As Mauricio, he leaves no witnesses alive. In his first major role, Jacob Perez is Miguel. Smart, conflicted, grieving, and blameless, he touches all the right notes.

“Life doesn’t always play out how you expect,” says Jim to Miguel. He knows that too well. The Marksman starts at Carlos’ call to his sister to run. Problematically, the director fails to go back and fill in details of the prior lives of Miguel and Jim. What about Jim’s Vietnam service and skills as a marksman? Who was this older girl Miguel intends to marry? The long road trip to Chicago gave ample time to provide more background.

“Eastwood’s former 1st AD-turned-director Robert Lorenz leads with an uncluttered visual style, a respect for his characters framed in juxtaposition with the land that would make his former boss proud.” San Diego Reader

“This is less the Taken-style action thriller where we get to enjoy Neeson showing off his special skills than it is a Clint Eastwood-style cranky old guy movie.” Movie Mom

This Neeson/Eastwood comparable was worth my $5.99 streamed through Amazon.