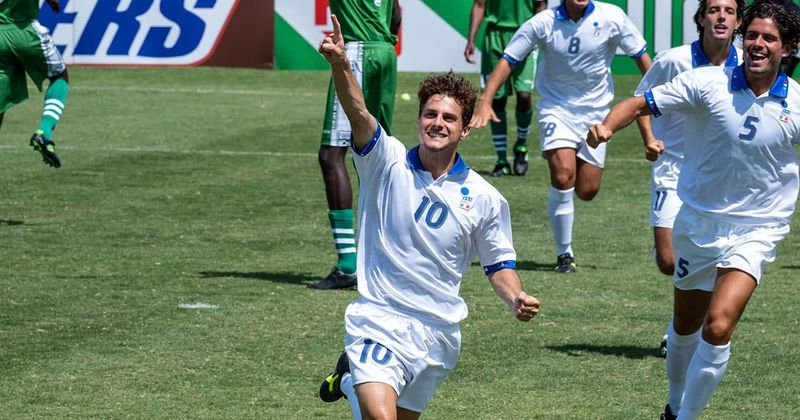 In Baggio: The Divine Ponytail, the ponytail is, in fact, divine (see below). The docudrama, however, not so much. It may be the most poorly acted, abysmally written, and appallingly directed 90 minutes ever. Then again, this is Netflix, so it has lots of competition. Poor Baggio! He is the most beloved soccer player in Italy’s history, if not their greatest player ever. How could they do this to the winner of the Ballon d’or in 1993, the best player in Europe that year? In 1994, he carries Italy to the finals of the World Cup before missing the penultimate penalty kick in the Finals. It only made him more loved, proving “he’s human, he suffers.”

Was Baggio “The Destined?” Pressure mounts early as he becomes the best paid 18 year old in Italy, sold from Vicenza to Fiorentina for 2.7 billion lire in 1985. Before he plays his first game for his new team, Baggio suffers a serious knee injury. His doctor was not sure if he would ever play again. Despondent, he refused to cash his checks if he couldn’t play. An introduction to Buddhism improved his outlook but even by 1988, he is still thinking about quitting. Two things keep him going, a woman and a promise. That sounds “human,” doesn’t it? In any case, I grant Baggio 2.0 Gavels and it receives a 6.1/10 IMDb score.

Italy loses the 1970 World Cup to Brazil 4 – 1. Three year old Roberto promises his father that, one day, he “will win the World Cup against Brazil for you.” In 1985, Baggio asks girlfriend, Andreina, to move with him to Florence. It will be another three years before she secures her father’s permission. The national team call-up will occur soon after. But, will he be the centerpiece of the team, or just a one-touch passer. Conflict with the coach is never good.

Acting at least since 2014, is Andrea Arcangeli (Baggio) really this bad? Even worse is Antonio Zavatteri (Medici) who plays the coach of the 1994 team, Arrigo Sacchi. In truth, no one stands out.

Many a coach refused to play Baggio alleging he was either unfit, or not a “team player.” That’s odd for a beloved icon. Finally, in 2000, he finds a coach whose strategy is “pass the ball to Baggio and let him score.” But will it be enough to get him on the 2002 World Cup roster?

“This biopic of the Italian soccer player Roberto Baggio is a botched effort. . . It’s a measure of how muddled the movie is that it never conveys how or why he became beloved.” The New York Times

“Much like Baggio’s penalty miss, this film shoots for the back of the net and wildly misses the mark, ending up in the obscurity of the stands instead. This is one to avoid.” The Review Geek

That pretty well sums it up!