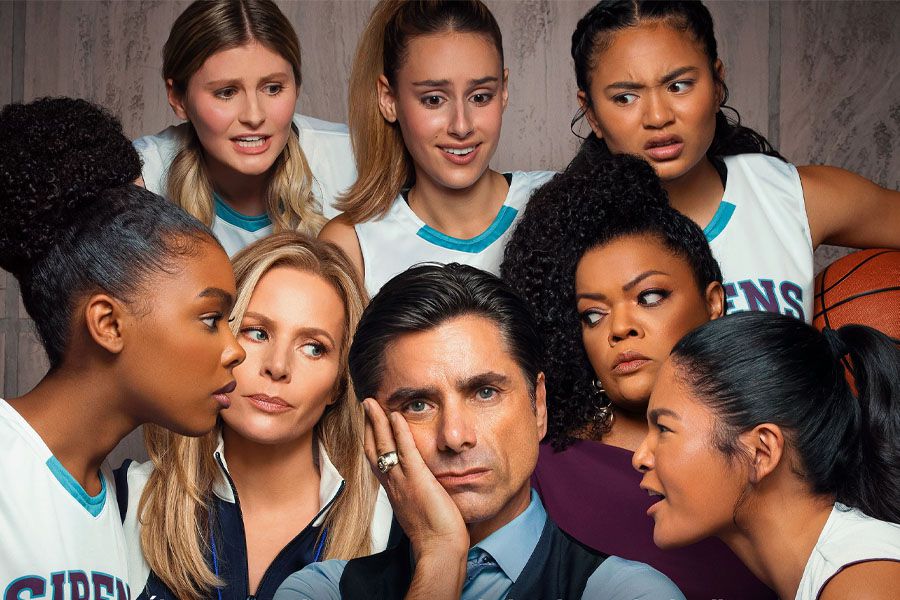 After the first episode of Big Shot, the question is whether Bobby Knight should sue for appropriation of likeness. Disney+ did make a few changes. Marvyn Korn coached at Wisconsin, not Indiana. And, when Knight threw the chair, he made sure not to hit the referee. Those details aside, the winningest active coach, with multiple NCAA championships, gets fired. Can he get a job in Division II? No! Will he coach boys at a nationally recognized high school? No! The major donor at an elite private girls high school wants his daughter to play at either UCLA or Stanford. Why not nudge the Dean to hire Korn? The Big Shot‘s last chance at redemption is coaching the Westbrook Sirens.

With a David Kelley (L.A. Law, Ally McBeal, Big Little Lies) pedigree, Big Shot shows promise. When Korn asks assistant coach Holly Barrett how to handle girls, she replies, “I’d say treat them like boys except you didn’t treat them so well.” Then she lists several ways that girls respond differently. The conscience of the show may be a girl who is 3,000 miles from San Diego. Korn’s daughter, Emma, attends school on the East Coast. She knows her dad well and doesn’t mince words. “Are people telling you not to be you?” “Did you hurt anyone?” Kelley knows how to create compelling characters. Will their phone conversations soothe the savage beast?

The genre for Big Shot lists as Comedy, Drama, Sport with six more episodes over the next six Fridays. I’ll gladly trade The Irregulars for this series. So far, Big Shot earns 3.5 Gavels, a 76% Rotten Tomatoes rating with a 6.6/10 IMDb score.

Upon arrival at Westbrook, Dean Thomas makes it clear that she believes Korn’s hire to be a mistake. But, she bowed to the will, and money, of mega-donor Larry Gruzinsky. Westbrook owns championships in other sports but girls basketball is a “joke.” Like a bull in a china shop, Korn tells his team they will no longer be coddled. He will call them stupid and tells his second best player to lose 5 pounds. To top it off, he suspends his best player, Louise Gruzinsky. For a team with a 1-3 record, things do not look good for Friday night’s game against Laguna High. Rumors are that the team might quit en masse.

From Full House to ER, John Stamos is always the pretty boy of Hollywood, never quite a true A-list actor. Still, his likability factor is sky high and will serve him well as Marvyn Korn, a man who knows he needs to change. Reunited with Kelly from her Boston Public days is Jessalyn Gilsig (Vikings). Also divorced, will her Holly Barrett be a love interest for Coach Korn? Not seen in episode one but listed as a recurring actor is Keala Settle. You may remember her as the big voice, bearded lady in The Greatest Showman. Take a look at her in the making of that movie. It will bring a tear to your eye.

Is it sexist for Big Shot to be relegated to girls basketball? Further, are Sirens a politically correct nickname? After all, they are dangerous creatures who lure sailors to their deaths. Maybe that’s permissible because it is just men who get killed. To be sure, Coach Korn’s pep talks need some work, but then inspiring words can be tough to come by.

“If you want adult drama from your TV coaching, Beartown will still have to suffice, and Big Shot won’t fill the Ted Lasso-shaped comic hole in your heart. But I like the potential here and hope the show develops a stronger sense of what niche.” Hollywood Reporter

“While it’s easy to see what Big Shot is up to . . . it’s the softer touch that catches you off guard.” RogerEbert.com

Potential is a dangerous word. Will Big Shot fulfill its?