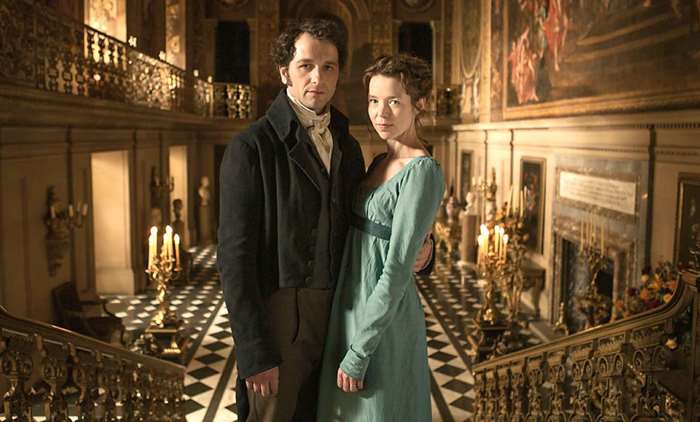 Add a murder mystery to the characters of Pride and Prejudice and you get Death Comes to Pemberley. Do you need to become intimately familiar with Darcy, Elizabeth, George Wickham, and Lydia to enjoy this three part series? Absolutely not. Death Comes to Pemberley gives plenty of flashbacks to remind us why Wickham and Lydia are not invited to the Lady Anne Ball. Set in 1803 against the background of the American Revolution and, more recently, the French Revolution, Pemberley looks nearly as fabulous as the palace at Versailles. Wealth and status still reign supreme six years after the marriage of Darcy and Elizabeth.

What about love? Nearly seduced by the scoundrel Wickham, Georgiana lives with our happy couple. She now has two suitors, Colonel Fitzwilliam and lawyer Henry Alveston. One is rich, arrogant, and secretive, the other a “radical making waves in London.” Of course, this is a mere subplot to murder. In the tradition of Masterpiece available through Amazon Prime, Death Comes to Pemberley keeps us guessing. Yet, we enjoy the scenery, the costumes, the acting, and the duplicity. After all, Wickham may be “envious, deceitful, and ungrateful, but never violent.” I give the three hour series 4.0 Gavels and it receives an 82% Rotten tomatoes rating with a 7.1/10 IMDb score.

On the eve of the ball, uninvited Wickham, Lydia, and Captain Denny reach the woods at Pemberley. Abruptly, Denny exits the carriage, Wickham in close pursuit. Two shots ring out. When found, Wickham cries out “I’ve killed him.” The magistrate take the “confession” at face value. Death Comes to Pemberley, but also scandal. If brother-in-law George hangs, social and financial repercussions to Darcy, Elizabeth, and Georgiana will soon follow. Wickham proclaims his innocence, but a strong motive comes to the forefront.

When cast as Darcy, Matthew Rhys had yet to shine in The Americans. Now, we know him as Perry Mason. Anna Maxwell Martin continues to impress as Elizabeth, just as she did in Bleak House and The Bletchley Circle. Unwilling to hear the worst about her fun-loving George, Lydia is well out the the norm for this English period. Fans of Victoria will recognize Jenna Coleman immediately. Then again, fans of The Crown will note Matthew Goode (George), Eleanor Tomlinson (Georgiana) of Poldark, and James Norton (Alveston) of Grantchester . A fine cast, indeed.

When the ball is cancelled because of the murder, Elizabeth wryly observes, “the only thing people enjoy more than a good ball is a good scandal.” Then, when a gossipy do-gooder arrives to let Elizabeth know that tongues are wagging, she replies “I trust you answered all their questions with a mix of fact and fiction.”

“Notwithstanding the changing fashions and modern appliances, there isn’t much distance between Pemberley and Downton Abbey; were the Dowager Countess to wander in, the Darcys wouldn’t bat an eye – they’d recognize her as kin and offer her some tea.” says the LA Times. Succinctly, The Guardian writes “it’s a fabulous mashup.”

I’ll conclude with The Huffington Post. “Pemberley is TV as comfort food: If you are like me and your self-soothing strategies include “sit down with a nice cup of tea and watch U.K. actors crush a well-appointed period piece,” this drama might be right up your elegantly landscaped alley.”