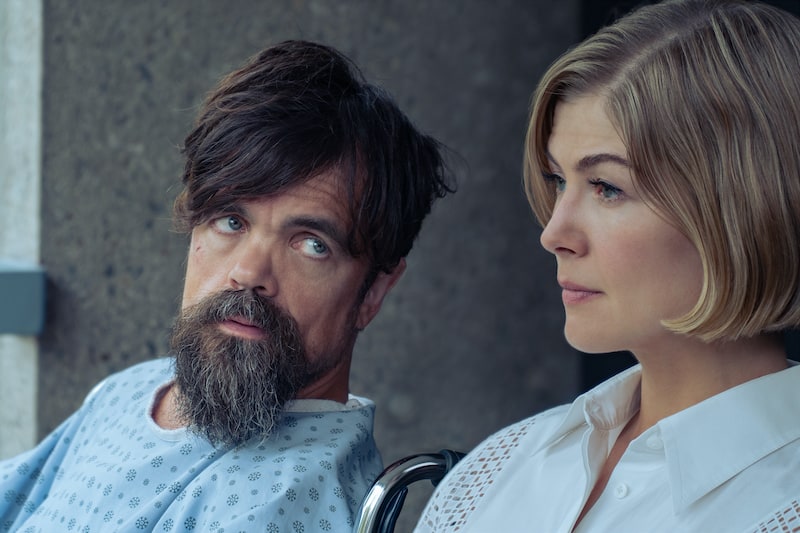 It’s hard to care a lot about the main characters in I Care A Lot. One takes advantage of the elderly, stealing their money and dignity, the other is a murderous Russian mafioso. Then, of course, that is the point in this dark Netflix comedy. The stark difference of opinion shines brightly in the 81% Rotten Tomatoes score juxtaposed against the 31% Audience score. At the start, you will definitely lean toward the opinion of your fellow viewers. The middle slants in favor of the critics. The end is somewhere in the middle.

Early in life, a male learns to say nothing but compliments about the female look. Tiptoeing with trepidation, the first thing you note in I Care A Lot is Marla Grayson’s haircut. Not just me, but entire articles are written about it (New York Magazine, Popsugar). Contrast it with the scraggly, Rasputinesque mane of Roman Lunyov. Which one gives the Power? In any case, greed is at the forefront of I Care A Lot. Marla is expert at manipulating within the system, Roman outside the law. Marla complains that Roman does not play fair even as she uses deceit and bribes to find her “cherries.” If you can stomach a film without morality, I Care A Lot might be a nice conversation starter. I give the film 3.5 Gavels and it receives a 6.3/10 IMDb rating.

Marla Grayson pays Dr. Karen Amos to find elderly patients upon whom she can seek emergency guardianship orders. She immediately begins to liquidate their assets to pay for nursing homes, medications, and naturally, her fees. If a family member complains, then he/she will no longer be allowed to visit their loved one. Together with her assistant and lover, Fran, life is good, until they make Jennifer Peterson their involuntary ward. Finding uninsured diamonds is one hint that Jennifer may not be who she seems. Roman Lunyov, former boss of the Cleveland Russian Mafia, is not happy when both his mother and diamonds disappear.

Like Blake Lively in A Simple Favor, Rosamund Pike (Radioactive, A Private War) is Machiavellian as Marla. She will not lose, preferring revenge to running. Peter Dinklage (The Croods: A New Age) is a hoot as a killer doing his best not to lose his temper. You can care about the flick when both are on-screen at the same time.

In a drug-induced stupor, Jennifer still has the wits about her to let Marla know “I’m the biggest mistake you’ll ever make.” But, to Marla, it’s all a game, as long as you play by her version of the rules. Is there any way for the two Type-A personalities to co-exist? Must one, or both, die?

“I Care a Lot belongs to the Gillian Flynn school of feminism, which proposes that the act of taking back control in a male-dominated society shouldn’t be reserved for honorable women. Because there’s a gender imbalance in the world of villainy, too.” Rohan Nahaar

“The movie is either delectably wicked or dyspeptically sour – you decide. I went back and forth while watching, though there was never a moment when I wasn’t glued…” Hollywood Reporter

Lots to like here; lots to dislike. This one just has a different feel to it. Definitely, some will despise it. Still, initially certain that I wouldn’t make it to the end, I’m glad I did, I think. Back and forth.