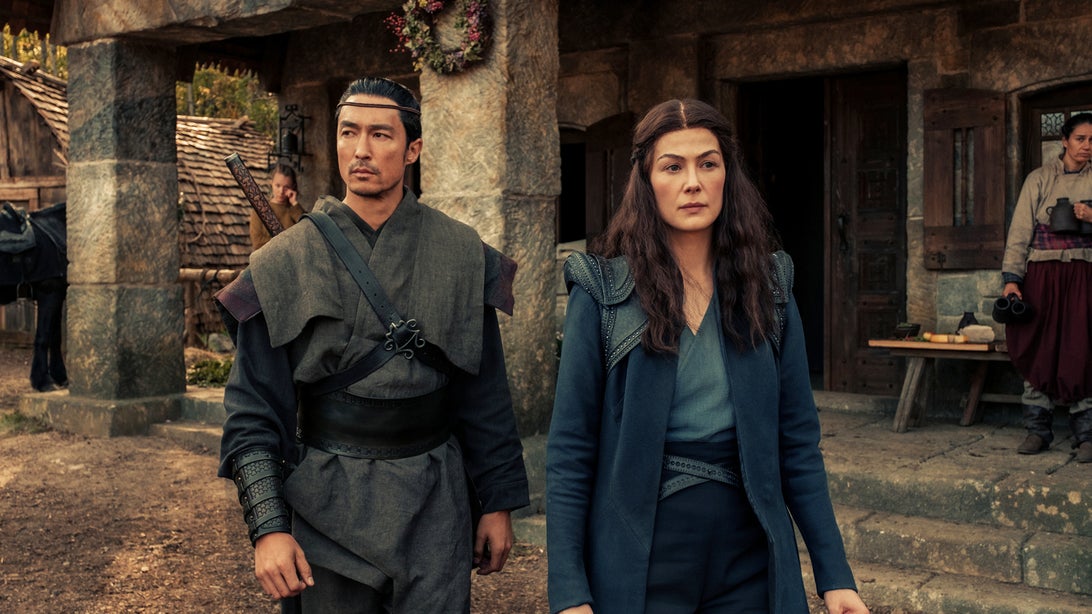 As every streaming service looks for the new Game of Thrones, why not start with The Wheel of Time? Besides selling 90 million volumes, it has a video game, a roleplaying game, and an album. Now, it is the #1 series on Amazon. Piqued your interest? Starting off strong, The Wheel of Time initially feels like The Lord of the Rings meets GoT, but is apparently based upon a mix of European and Asian mythology, the conflict between Light and Dark. Obviously pleased with the result, Amazon Prime ordered a second season before the first three episodes dropped November 19th. The remaining five episodes will drop Fridays until December 24th.

“The world is broken. Man released the Darkness. Only the Dragon can stand against him and one of them is you.” So says Moiraine, an Aes Sedai. After the male side of the One Power became corrupt and insane, the female side took charge. Twenty years ago, a prophecy proclaimed a Dragon-reborn. Since then, both the Aes Sedai and the Darkness search for him or her. Should this person be eliminated or controlled to prevent the further destruction of the world, or should they be fully unleased to conquer the Darkness? The Aes Sedai disagree among themselves. But first, they have to find him/her. The Aes Sedai, themselves, have plenty of enemies.

Filmed in Prague, The Wheel of Time, like others of its type, creates a whole new world. So far, lots of mountainous terrain. Looking at the trailer, even more fantastic sets are on the horizon. The tale is complex, as you might imagine since its books cover some 14 volumes, the character names unusual. The first two episodes engross before the third begins to lag. Better times may be yet to come. Thus far, I give The Wheel of Time 3.5 Gavels and it receives a 72% Rotten Tomatoes rating with a 7.4/10 IMDb score.

Rand, Perrin, Mat, and Egwene are 20 year old residents of the Two Rivers. Moiraine upends their simple life with the announcement that one of them is the Dragon. None believe her, but after an attack by the Trollocs, they must leave with her to protect their families. Followed, they take refuge in the abandoned city of Shadar Logoth. An evil spirit splits the villagers into three groups. Will they be able to reach The White Tower and Moiraine’s “sisters” safely? Who can they trust? Who is the Dragon?

Rosamund Pike (I Care A Lot, Radioactive) is the big-name star of The Wheel of Time. Waving her arms, dredging up the One Power, I’m not yet sold on her as Moiraine, but we’ll see. Yet, I’m completely sold on Madeleine Madden (Dora and the Lost City of Gold) as the conflicted Egwene. She can be a Wisdom or she can marry Rand. Daniel Henney operates as Moiraine’s warder, sort of ninja-like.

The Aes Sedai take the Three Oaths: 1. Speak no words that are not true. 2. Make no weapons that one can use to kill another. 3. Never use the One Power to take a life except to save her life, that of her warder, or another Aes Sedai. Given the number of their enemies, that Oath will be sorely tested. Using the religious framework, one can easily substitute Lord for Light and Devil for Darkness. The Whitecloaks and their Questioners (above) remind of the Inquistion.

Con — “It fulfills Jeff Bezos’s alleged demand that Amazon develop its own Game of Thrones – in the most unspecial manner possible.” Washington Post

I’ve mixed emotions on this one. The trailer, cast, CGI, and production values suggest more. However, the story needs to pick up its pace.