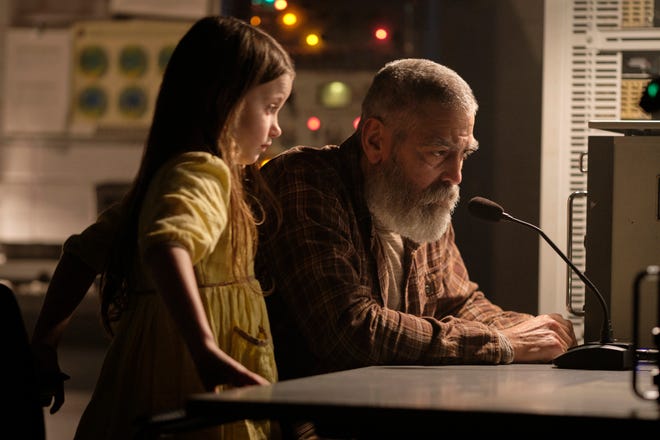 Visually appealing, but scientifically impossible, The Midnight Sky is a mixed bag. Because of its many, many flaws, science-fiction geeks will scream at the screen. On the other hand, George Clooney fans will marvel at his connection with seven-year old Caoilinn Springall. Like Beecham House, The Midnight Sky is a feast for the eyes. The Arctic scenes, K-23 adjacent to Jupiter, the Aether, and deep space are something to behold.

Ultimately, The Midnight Sky is a film about connection. Although there is some action, it is secondary and actually diminishes the overall effect. The Aether lost contact with the Earth three weeks prior and assumes the fault lies with spaceship. The Barbeau Observatory needs to advise the Aether not to return to Earth, but its antenna is not strong enough. Across the vast expanse of space, all is quiet, too quiet. Lives will be risked to re-establish communication. We are not a species that craves separation. Sweet Caroline serves as a touching reminder. I give The Midnight Sky 3.5 Gavels and it receives a 54% Rotten Tomatoes rating with a 5.5/10 IMDb score.

In 2049, radiation is killing Earth, spreading quickly towards the Arctic. Scientists evacuate the Barbeau Observatory, but a dying Augustine Lofthouse remains. It was his idea to explore and colonize K-23. Now, it is essential he warn the returning astronauts that landing means certain death. He must now also protect young Iris, accidentally left behind. Is he physically, and mentally capable of the long trip to Lake Hazen? Will he make contact in time?

George Clooney (Suburbicon) has said he makes big budget movies so he can make independent ones he wants to make. At $100 million, I assume this is the former. He thinks this is a film of hope. It does make you think of Adam and Eve. Opposite his Augustine is Felicity Jones (The Aeronauts) as Sully. Her love interest is Commander Gordon Adewole, played by David Oyelowo (Queen of Katwe). With Kyle Chandler, Demian Bichir and Tiffany Boone, Clooney did not spare money on the cast.

“Why do some get a lifetime and some get a few years?” Philosophers, and regular folk, ponder that thought since the dawn of time. Given the lack of options, the question becomes particularly poignant here. Even if you can’t suspend belief, enjoy the talents of Caoilinn. She is quite the scene-stealer.

Critics nearly divided, CinExpress declares ” George Clooney’s best directorial effort so far. Part Gravity, part The Revenant and part Ad Astra, it hooks you with incredible visuals and meditative tone, while it explores themes of doom and hope.” Not so fast says Movie Nation. “As a filmmaker, (Clooney)’s lost his fastball and curveball, if not his slider.”

Many of Clooney’s pics leave me scratching my head. This one is no exception. In total, I think the good outweighs the bad.