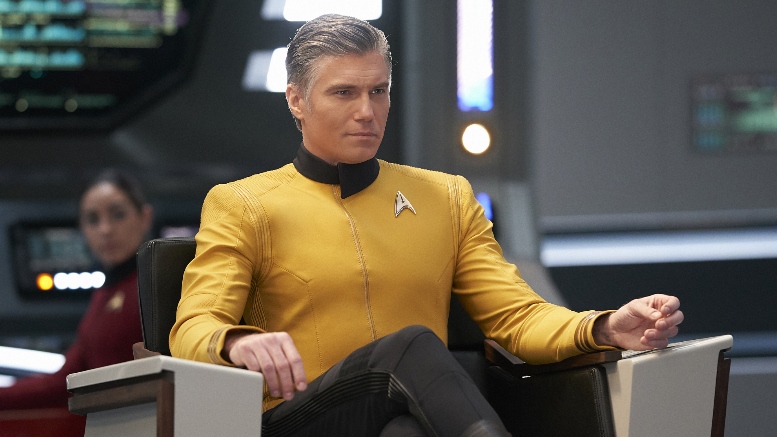 Those wishing for the return of James T. Kirk and Spock have only to look to Paramount+ and Star Trek: SNW (Strange New Worlds). Well, really, you don’t get James T. Kirk until Season Two, but you get his brother, Sam, in Episode One. Star Trek: TOS (The Original Series) ran from 1966-1969, starring, among others, William Shatner and Leonard Nimoy. TOS is set “circa 2266-2269.” Now, keep the USS Enterprise and a young Spock and Lt. Uhuru, then re-set the time frame a decade earlier. Voila! You have eleventh Star Trek series now under the name of Star Trek: SNW.

Since TOS, Star Trek evolved into series stories, one episode a building block for the next, leading to a finale. Star Trek: SNW intends to take you back to its roots, each episode a stand-alone. As the executive producer puts it, “but it really is back to the model of alien-of-the-week, planet-of-the-week, challenge-on-the-ship-of-the-week.” The first of ten episodes dropped May 4th, the rest weekly through July 7th. First Officer Una reminds us “we are not alone. First contact is a dream until it isn’t.” Watch Spock court fiance T’Ping as they verbally spar. “Matrimony and duty. The two will complement each other.” “I remain skeptical.” Find out how General Order #1 becomes The Prime Directive. I give Star Trek: SNW 4.0 Gavels and it receives a 100% Rotten Tomatoes rating with a 8.3/10 IMDb score.

Still reeling from learning his fate during Star Trek: Discovery, Capt. Chris Pike questions his return to the Enterprise. Even as he understands a first contact gone bad, his friend Una disappearing, Pike hesitates. An order from the Admiral and a pep talk from Spock puts Pike back into the Captain’s chair. The USS Archer investigated warp signature readings on Kiley 279. Plasma torpedoes greet the Enterprise. That 21st century technology brings the conclusion that the planet has no warp drive, yet possesses a warp bomb. No civilization in history developed warp technology in that order. Blatantly disobeying General Order #1, Pike decides to investigate. “Not believing you’re gonna’ die is what gets you killed.”

An upswell of support from the fans earns Anson Mount (Black Bolt in Dr. Strange 2) a return as Capt. Chris Pike. You will cringe as Pike says “Hit it,” a poor substitute for “Engage.” Ethan Peck (Midnight Sky) has big shoes to fill as Spock. It’s too early for any comparisons. Although constantly working, it seems like the X-Men series since I’ve seen Rebecca Romijn. Here, she’s second in command as Una.

Memory, frail as it is, I have no memory of Christine Chapel, nurse to Dr. McCoy. In Star Trek: SNW, she gets third billing, far ahead of Dr. M’Benga. Her work with genetic alterations comes in quite handy, if only Spock’s body would comply. With lots of characters from all over the universe, the writers will have plenty of material.

“It’s almost startling how effective the old format is after all this time. The early episodes of Strange New Worlds have a little bit of everything the franchise has tried over the years: exploration, diplomacy, action, even comedy.” Rolling Stone

“Oh, joy! A Star Trek origin story that captures the humanism, humor and impulse to connect of the original while smoothly ‘assimilating’ into the larger Star Trek universe.” TheWrap

For those ready to put Anson on a pedestal with the best of the Enterprise Captains, I’ll withhold my vote. He has many Strange New Worlds to explore before he shares the stage with Shatner and Patrick Stewart.