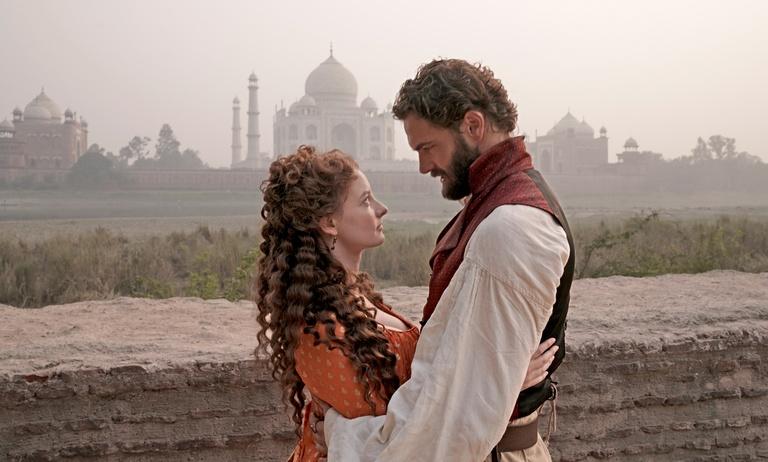 Billed as Delhi Downton Abbey, Beecham House is not. That’s about as apt a comparison as saying it’s a Clint Eastwood spaghetti-Western made in India. Created and written by the same woman who gave us Bend It Like Beckham and Blinded by the Light, this six-part series is why color TV was invented. The mansions, the costumes, the carriages, and the food look sumptuous. The locales around Delhi are exotic. Everything is in place for another wonderful Masterpiece presentation, available on Amazon Prime. Except, it’s not.

By and large, the actors of Indian ancestry are very good. It is the Brits who fail Beecham House, many miscast. While the story has a few moments, it pails against the usual Masterpiece fare. The “secrets” telegraphed, the series becomes too predictable. Overall, Beecham House becomes too Bollywood. This one needs a do-over, and there will be no Season Two, despite a set-up finale. I give Beecham House 3.5 Gavels and it receives a 6.6/10 IMDb rating.

In 1792, a disillusioned John Beecham abandons the East India Company in Calcutta. Roaming around India, he rescues a maharajah and his two daughters from an assassination plot. Three years later, he arrives at a mansion in Delhi, a child, two women, and several servants in tow. Besides the questions of the child’s heritage, John’s former connection to the hated British company draw the attention of a French general and the Emperor. The lovely governess, Margaret Osbourne, draws John’s attentions. As in all Masterpiece conventions, treachery and betrayal await.

Tom Bateman (John Beecham) is one handsome dude. He was so good as the bad guy in Cold Pursuit. Maybe it’s the climate, but his smoldering charm doesn’t smolder in India. Likewise, his mother, played by Lesley Nicol, is delightful as Mrs. Patmore in Downton Abbey. Here, she just huffs and puffs. The best of the lot is Pallavi Sharda, the mysterious Chandrika. Does she have the true “connection” to John Beecham?

“The British are never more treacherous than when they espouse virtue.” “Every woman needs an army to protect her against profiteers and deceivers.” As I said, the dialogue has its moments.

The Financial Times moans “the selling point of Gurinder Chadha’s series Beecham House was supposedly the equal emphasis on both Indian and European characters. But as this Poldark with turbans features mostly stereotypes, it feels like a hollow victory.” Or, as the UK Times puts it “Beecham House is a feast for the eyes, but not always for the ears…”

As a travelogue to India, this one is hard to resist. Yet, the yarn doesn’t travel nearly so well.