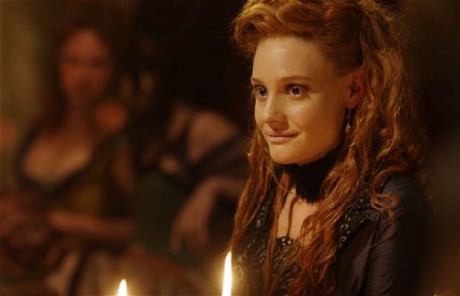 If you Google the Best British Period Pieces, The Crimson Petal and The Rose is one of the selections. I am unclear about the fascination of critics with 18th and 19th century London brothels, but recently watched 1.5 episodes of critically acclaimed Harlots on Hulu, and I came away unfascinated. Likewise, The Crimson Petal now joins Love in a Cold Climate at the bottom of the British Period Piece heap. Despite the love given to the novel, this is a gloomy time about gloomy people.

Granted, the acting is brilliant, the costumes elaborate, the sets amazing, but the story is tragic. A man has three women in his life, a wife with “madness”, a prostitute mistress, and a nearly abandoned eight year old daughter. He treats them all badly and suffers the consequences. If you enjoy the squalor of the back alleys of 1874 London, then this may be your show. Or, maybe you yearn to learn about the treatment, and mistreatment, of the mentally ill of that time period. Overall, it’s just a sad, sad tale. I give The Crimson Petal 3.0 Gavels and it receives a respectable 7.6/10 IMDb rating.

Dr. Curlew seeks to place Agnes Rackham in an asylum. Among other hallucinations, she refuses to acknowledge her own child, Sophie. Her husband, William, seeks solace in the arms of an educated prostitute, Sugar. Sugar encourages William to take his proper place in his father’s business, and the once-failing writer begins to prosper. William “buys” Sugar from the madam and sets her up in an apartment with a stipend. Seeing a better life, Sugar wants more. Will society accept a “rescued woman?”

If you enjoyed the wild and crazy Chris O’Dowd in The Sapphires, you will appreciate his range in The Crimson Petal. He gives a surprising performance as William Rackham. Notably, Romola Garai has nominations for Best Actress in five different films or series, including one from BAFTA for her role as Sugar. She needs that British “stiff upper lip” to survive a life of unimaginable pain. Noted actress Gillian Anderson plays Sugar’s “mom,” barely recognizable through the heavy make-up.

The quality of the writing in The Crimson Petal novel is described as “dizzyingly accomplished.” For example, Agnes “feels like a lost bonnet floating on a dark river.” As Sugar goes from muse to nuisance for William, the desperation mounts. Will he just toss her away? Where will she go?

IndieWire points out that “William is a creature of his era, oblivious to the women in his life until it’s too late, seeing them only as they exist to prop him up.” Variety writes “so while The Crimson Petal is tough, grim and explicit — and by the last measure provocative, at least relative to those accustomed to Dickens or Austen — the production finally feels unworthy of its length or leading lady.” By explicit, the reference is to nudity, the use of chamber pots, and more. Put his one in the not worth your time category.