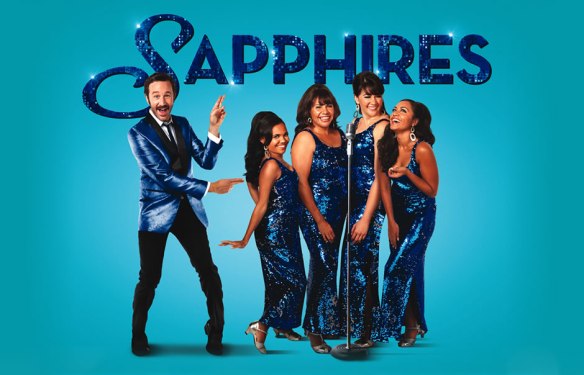 In Where Have You Been? (3/8/17), I highly recommended two Down Under independent flicks, The Sapphires and The World’s Fastest Indian. The recent release by Netflix gives me the opportunity to re-introduce the Australian Supremes to you. While the movie takes substantial liberties from their real life happenings, The Sapphires is packed with 60’s soul music, history, costumes, and even some Tupperware. Wit and humor and sass fill the screen. These ladies, raised on country music, switch to soul, and turn Vietnam on its heels. Like Gail, you will fall in love with the fictional character of Dave Lovelace, manager. His explanation of the difference between country and soul expounds and enlightens. I give The Sapphires 4.0 Gavels and it earns a 91% Rotten Tomatoes rating with a 76% Audience score.

In 1958, on the Cummeragunja Reserve for aborigines, three sisters and their cousin perform for their families. Very shortly, one of them will be taken by the government to be taught “white ways.”

In 1968, the three sisters enter a singing contest in a nearby town. A bumbling, alcoholic, loser emcee (Dave) sees his chance to manage talent. He does manage to obtain an audition in Melbourne in front of the U.S.O. Before they can go to Vietnam, a lost cousin, a lead singer, costumes, dance moves, a new sound, and trust must be found. After all, there’s a war on.

Tony Briggs first wrote The Sapphires as a play, based upon the true story of his mother and aunt, Laurel Robinson and Lois Peeler, who toured Vietnam as backup singers for a New Zealand Maori band. In a time of great discrimination against the aborigine, one of the original singers, Naomie Mayers, becomes a doctor and receives The Order of Australia in 1984. Although race is always an issue at the forefront of the film, The Sapphires is more comedy and music than drama.

The Hollywood Reporter praises The Sapphires as “a jewel-bright charmer about four spunky indigenous women whose powerhouse voices catapulted them onto the 60s-era world stage as Australia’s answer to the Supremes.” The Rolling Stone opines “you could call it an Aussie Dreamgirls. I’d call it a blast of joy and music that struts right into your heart.”

You can’t go wrong with this one!