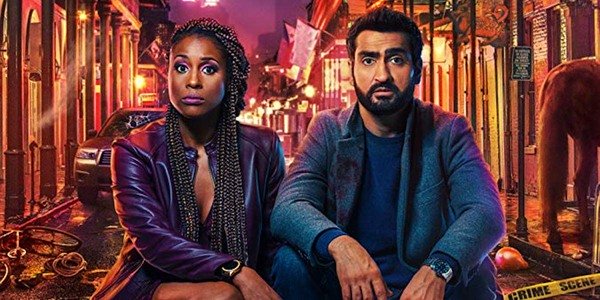 Take two very fine comedians, put them in silly costumes in beautiful New Orleans, add in a very poor script, and you get The Lovebirds. Designated a romantic comedy, I agree with Moustache who frequently mentions our unhappy pair are merely annoying. Even in a dark comedy, it is hard to make an arguing couple funny. Surprisingly, the critics give The Lovebirds a 67% Rotten Tomatoes rating. This shows how low the bar has become during the stay-at-home orders. The Audience is much more discerning with a score of 54%. COVID-19 and Netflix likely saved this film from disaster at the box office. Then again, The Lovebirds was made at a cost of $16 million. Not a lot to lose by Hollywood standards. I give the flick 2.0 Gavels.

Four years into their relationship, Jibran and Leilani find they have little in common. On the way to one last dinner before the break-up, they hit a cyclist. A mustachioed “cop” commandeers their car, chases the revived victim, runs over the cyclist several times, then flees the scene. Certain of being accused of murder, Jibran and Leilani go on the run, too. Their only hope? They must locate Moustache.

Kumail Nanjiani, so good in The Big Sick, so miscast in Stuber, continues his selection of poor roles. As Jibran, he has no believability, nor chemistry with Leilani. Issa Rae (Leilani) has it all, the smile, the likability, the one we root for. As in Little, she gets no help. It seemed she might get an assist from Anna Camp of Pitch Perfect fame. Alas, any efforts by Ms. Camp remain on the cutting room floor.

The best parts of The Lovebirds are in the trailer, although that is not saying much. If I use too may cliches in this review, please excuse me. It carries over from the movie. IndieWire writes “The Lovebirds is all too happy to embrace its destiny as a disposable movie in a throwaway year.” The Observer is less kind commenting “the humor is meant to derive from how out of place these two are in this seedy milieu, but it is difficult to have a fish out of water comedy when all you have is a couple of empty hooks.” As one might expect, if it was good, it wouldn’t go direct to Netflix. These Lovebirds ate some bad birdseed.