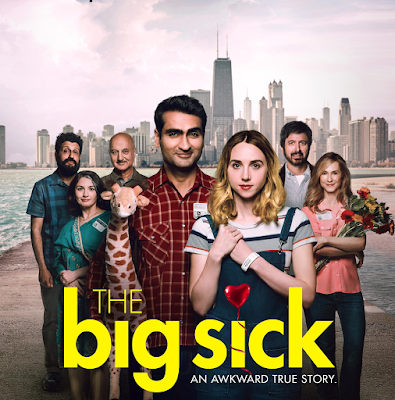 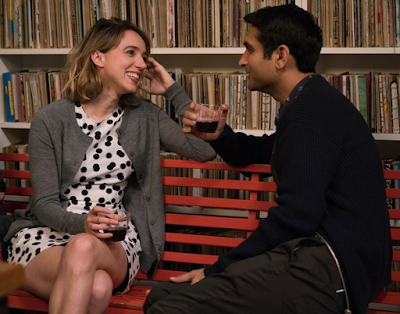 I hope Kumail Nanjiani will  not be offended when I refer to him as the Pakistani Ray Romano, his co-star.  They have that same low-key, self-deprecating sense of humor; it was almost like watching father and son.  The Hero was very good, and this is even better.  Get out your pencils and add this to your must-see list.  This is a romantic comedy based on the true story of Kumail’s courtship with his wife, but it is so much more.

Kumail is a stand-up comedian when he is interrupted by Emily (Zoe Kazan) during a performance. Although neither is looking for a partner, sparks fly.  While Emily slowly accepts her feelings and tells her parents, Kumail is afraid he will be cut off from his family if he tells them he is dating a white girl.  The arranged-marriage dates set up by his mother are some of the funnier scenes.  Emily wants to meet the families, and finally exasperated she asks, “Do you ever see a scenario when we can be together?”  Getting an unsatisfactory reply, she walks out of his life.

Some time later, Kumail gets a call that Emily is in the hospital and is “coerced” into allowing the doctors to put her in a medically-induced coma as her husband.  Now Terry (Ray Romano) and Beth (Holly Hunter) arrive and are aware that Kumail has done their daughter wrong.  Beth is an unforgiving spitfire mom while Terry is protective yet somewhat more understanding.  The actors and writers do a superb job of acknowledging the serious drama of the illness while still mining for a few nuggets of humor.

For those expecting a stand-off contest of stand-up comedians between Kumail and Ray, they will be sorely disappointed.  Rather, this is a thoughtful drama of how folks deal with customs, sickness, love, pain, forgiveness and hope.  Kumail (Silicon Valley) allows the audience to see how deeply his love for his family causes him to pull back from Emily yet her magnetism won’t let him go.  Zoe Kazan is that goofy girl that everyone loves and you can feel the audience rooting for her to get well. Ray Romano is, and will always be, Everyone Loves Raymond, but I think some will be surprised at his dramatic skills.  Holly Hunter’s pivotal scene is when she unexpectedly protects Kumail; after that, you know the parents are sold that Kumail is the right guy for their daughter.

Don’t be surprised if this independent $3.2 million movie is soon playing at the major theaters.  This is one of those movies that has a buzz to it and could easily take off.  While The Hero is probably limited due to the age and Western subject matter, The Big Sick actors are well known to millennials, everyone likes a good love story, and everyone knows what it is like to deal with a sick loved one. Folks, this is a good one!