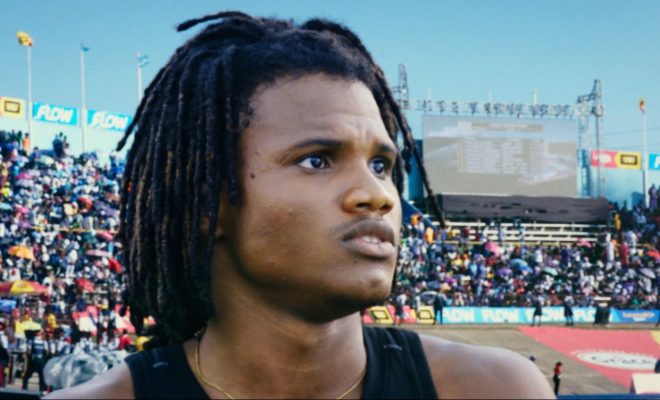 Memo to Will and Jada Pinkett Smith and all other producers: Do not put phone scams in movies! We get too many in real life and do not want to re-visit these horrors on the screen. That said, Sprinter brings us a cool name in the Rasta Rocket, name-calling in “rum-head,” sweet reggae music, and Usain Bolt. For all that, Sprinter is still slow out of the starting blocks. Winner of several awards, this track and field film is my least favorite “overcome hardships to become a champion” flick so far. For what is described as an uplifting film, our star is a tad too moody. With every sports cliche utilized, I give Sprinter 3.0 Gavels and it receives an 80% Rotten Tomatoes rating with a 100% Audience score. (As of this writing, that includes only 10 critics and 10 Audience reviewers, not a large sample.)

Abandoned by his mother at a young age, raised by an alcoholic father, “mentored” by a brother heavily involved in lottery phone scams, Akeem lacks role models and stability. Aiming to copy his brother’s previous achievements in the 400 Meters, Akeem is just another runner. When the coach forces him into the 200 Meters, he finds the winners circle, fame, and girls. Will this go to his head or will he be able to retain his “mental blinkers?”

This appears to be Dale Elliott‘s first film and it shows. While promising, his lack of range as Akeem limits its effectiveness. David Alan Grier (The Big Sick) as his coach and Lorraine Toussant (Girls Trip) as his mother, solid veteran actors, do not get enough screen time to be particularly beneficial. Shantol Jackson plays Kerry, a fellow sprinter and love interest. She appears one to watch.

When asked if the title “Jamaica’s next great sprinter” caused him any concern, Akeem replies that the coach tells him to turn “pressure into propulsion.” Akeem’s brother offers an interesting perspective of pro versus college. One critic writes “the obvious passion poured into Sprinter makes not liking it feel mean-spirited in some way.” It’s not so much “not liking it,” as not liking it as much as you hoped. As a police officer tells Akeem, “No man can outrun the choices he makes.” I wouldn’t run away from this movie, but I wouldn’t sprint to it either.