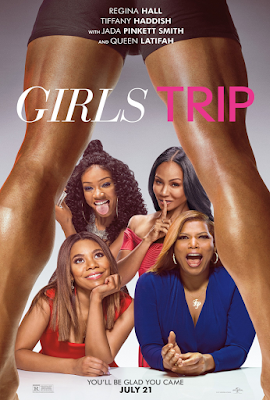 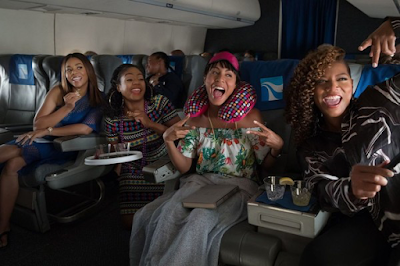 Good news!  It’s better than Rough Night!  Bad news!  I wondered why Scarlett Johansson did Rough Night; I am even more confused why Queen Latifah and Jada Pinkett Smith did this one.  This genre, male or female, is fast becoming my least favorite.  Each must be raunchier than the former, and each must come up with a new sex experience.  In this case, it’s the grapefruit.  Don’t ask.  The actresses were quoted as saying this movie proves we can be as bad as the boys.  Is Hollywood telling us there is no difference, therefore, we should be paid the same?  I liked Charlize Theron’s comment at this week’s Comic-Con convention.  “If you want to be paid more, then sell more tickets.  Women, you have to go see these movies.”  Dunkirk Gross $50 million. Girls Trip Gross $31 million on a budget of $28 million, so, alas, it seems we may see Girls Trip 2. #RaunchSells.  Reportedly, 79%  of the audience was female, so the girls were tripping together.

Regina Hall stars as Ryan married to Mike Colter as Stewart.  They have become America’s favorite couple and Ryan is invited as the guest speaker at The Essence Music Festival in New Orleans.  Ryan invites her college buddies along for the trip as a reunion.  Jada is Lisa, a divorced nurse and primarily concerned about her two kids.  Queen, as Sasha, is a gossip columnist heavily in debt. Tiffany Haddish as Dina is the wild child who never grew up.  Ms. Haddish is getting all sorts of love from the critics as a scene stealer and this should be her breakout role.  To the contrary, I thought all did a fine job, given the material provided.  If there is ever a stereotype in movies, it is the dumb agent.  In this case, it is played unconvincingly by Kate Walsh.  She and Mike Colter both were fish out of the water.

After one hour and 45 minutes, this movie actually became worthwhile.  Prior to that, the movie was primarily drinking and trying to get Jada to have sex with a stranger 20 years younger than her.  In the last 15 minutes, the movie addressed a serious issue of how a woman responds to her husband’s infidelity when her persona is sold as a package with his.  Only then did this movie hit its stride.  It really was a shame that one had to watch the same old stuff to get to the good part.

This weekend Spiderman came in third with $22 Million and the Apes pulled in $20 million. Valerian was fifth with only $17 million but all were very close to studio estimates.  Valerian will have to do well internationally or its franchise is over.  It opens in France next week.  As suggested, 40% of the audience was under age 24, but it needs an even higher percentage of that age bracket.