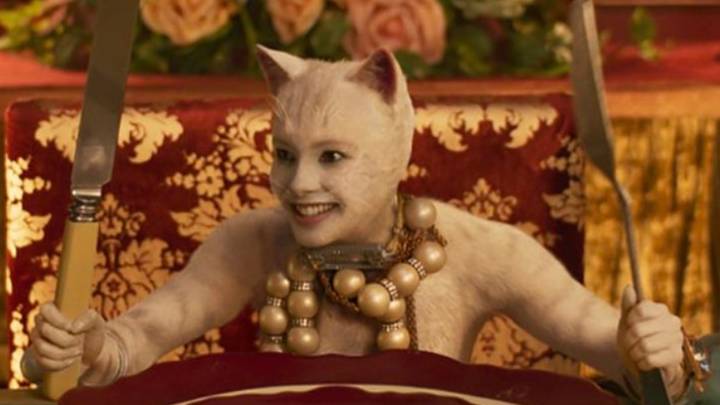 Already on record that Cats is my least favorite musical ever, let me say that the movie is an achievement. The dance, the set design, costumes, and and make-up are something to behold! Having said that, the first half is like watching cats clawing on a blackboard, excruciating. It is only the mesmerizing visuals that keep your attention. Watch the ears twitch, the tails sway, and the cat-ballet movements. But, once Jennifer Hudson (Grizabella) sings Memories, followed quickly by Gus: The Theater Cat, and Mr. Mistoffelees, the cats are in fine voice. For all the big name stars, it is Francesca Hayward, an English ballerina, as Victoria, that you can’t take your eyes off. She is magnificent! I give Cats 3.5 Gavels but the cat-hating critics stand at 19% Rotten Tomatoes rating with a 63% Audience score.

Victoria, an abandoned cat, wants to become part of the Jellicle cat tribe and be invited to the Jellicle ball. At the ball, one of the tribe is chosen to ascend to the Heaviside Layer and gain a new life. Several cats are in the running but they come up missing. Even the leader, Old Deuteronomy (Judi Dench) can’t be found. What is that no-good Macavity up to?

Idris Elba is great fun as the more than mischievous Macavity. Rebel Wilson is a disappointment as Jennyanydots, but she does get a few funny lines. Oddly, Taylor Swift‘s song Beautiful Ghosts is sung by Victoria. I thought she did a fine job as Bombalurlina, Macavity’s cohort in crime. She was on the screen all too briefly. Who else could be Gus other than Ian McKellen?

Give credit where credit is due. If you want cookie-cutter movies, one the same as the other, then look elsewhere. Like Marriage Story, Cats starts slow. But, if you like modern dance, this is quite the spectacle. It is said that you either like Cats, or you hate it! Critics are no different. One called it “purr-fect,” another said it was a “hairball.” Moreover, the bean counters already doom this $90 million flick as a disaster. One studio exec crowed about how well it is doing with the over 55 demographic. That sounds like the kiss of death.

Yet, somehow, this jumbled group of poems enthralls the audience. Our Saturday afternoon fellow movie-goers seemed well-satisfied. Certainly, I can’t predict but it is nice to see something different on the big screen. Let’s call this one better than expected, but then I’m over 55.