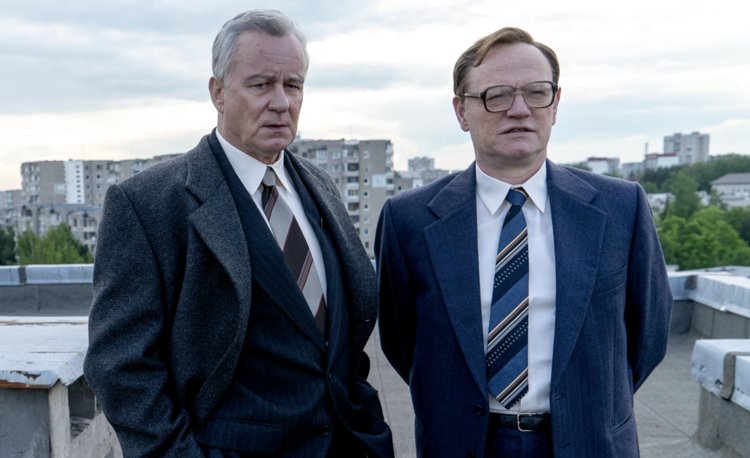 If Vladimir Putin doesn’t like it, it must be right on target! Too cheap to buy yet another service, my son convinced me that HBO’s Chernobyl was worth the $18.95 for the five episodes. He is absolutely correct. Apparently, Putin has a point that the show goes overboard in depicting Russian officials as “evil and conniving,” but the factual details are riveting.

You will be amazed how closely Ukraine and Byelorussia (now Belarus) came to being uninhabitable for 100 years. Mistakes and cover-ups abound. Very few could imagine that a nuclear core could explode, even fewer knew how to respond. Folks, this is a top-notch show, regardless of some Hollywood over-zealousness. I give Chernobyl 4.5 Gavels and it receives a 96% Rotten Tomatoes rating with an equally impressive 98% Audience Score.

In April 1986, the Russians are running a test on a nuclear reactor at Chernobyl. An explosion occurs but the engineer in charge believes it to be minor. One device to measure radiation maxes out at 3.6 roentgens (thought by some to be safe), the other device is locked in a safe and unavailable. Local firemen are called in and suffer immediate effects of radiation poisoning, yet the populace is not warned. Initially, only Valery Legasov, a nuclear physicist, is willing to sound the alarm, a warning that must go all the way to President Mikhail Gorbachev. Anyone entering the Chernobyl zone would clearly face an early death from the effects of radiation. Who will volunteer?

You know Jared Harris from Mad Men or The Crown. Nominated for an Emmy, here he is Valery Legasov, earnest in his attempts to solve a problem for which their are no good answers. Also nominated for an Emmy, Stellan Skarsgard, is Boris Shcherbina, the minister designated to go to Chenobyl with Legasov, and report directly to Gorbachev. A Swede by birth, Skarsgard makes an excellent Russian, stunned by the news that he will not live a long and healthy life. Yet another Emmy nominee, Emily Watson portrays Ulana Khomyuk, a composite character that, but for her intervention, Legasov would have made a catastrophic mistake.

Chernobyl is based in large part on the recollections of Pripyat locals, as told by Belarusian Nobel laureate Svetlana Alexievich and received 29 Emmy nominations. Ms. Alexievich notes the “accursed Russian questions: what is to be done and who is to blame?” But, is that so different from American society? Because the mini-series gets input from the locals, it does not focus just on the engineers and the politicians. Chernobyl also chronicles the bravery and suffering of the first responders and miners. You didn’t know they had to dig a tunnel under the reactor? My guess is there will be lots of surprises for you in this show. This is a quality program, highly recommended.