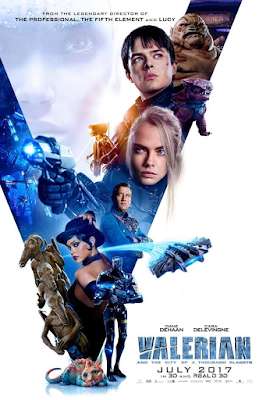 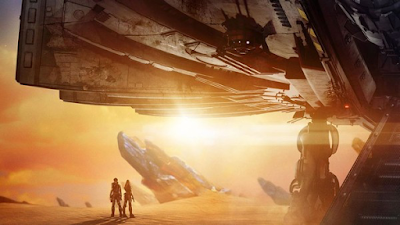 If you could imagine a world 700 years from now, would it be as wacky and wonderful as this one? Rest assured this is no Avatar, although some similarities creep in. Still, it is a feast for the eyes.  In Avatar, James Cameron wanted to amaze you with his new world but he also wanted to warn you about environmental disasters.  While this movie has its own morals about human behaviors, it allows the viewer to enjoy the ride.

To try to explain the plot of Valerian is difficult because it is somewhat rambling.  Valerian and his partner, Laureline, are federal agents out to protect the City of Alpha.  Long ago, Alpha was in Earth’s orbit but became too big as it attracted all sorts of different species.  Alpha was jettisoned into space. The planet of Mul was destroyed by representatives of the government but there were survivors. Both the government and the survivors need the same item in order to advance their cause.  All converge on Alpha where the confrontation occurs.

The movie begins with a somewhat unique scene of how we might greet others in outer space over the centuries.  Next, we advance to the beautiful planet of Mul before it was destroyed as the story unfolds.  Thereafter, we are immersed in an invisible 3D city, all before we get to Alpha.  Luc Besson has imagined a crazy world in Alpha including butterflies attached to fishing hooks.  (I told you it was tough to explain but, even if you are not enamored with science fiction, you will enjoy this scene and those to follow).  You will see jellyfish who help find lost companions.

At all times, one must remember this movie is based upon a comic book.  The movie is criticized because Dane DeHaan (Major Valerian) and Cara Delevingne (Sgt. Laureline) have no gravitas.
How many real-life Majors look like they are in their mid-20’s?  This is a movie designed to attract millennials and they act, appropriately, like young kids in love.  (I acknowledge that some of their love spats could be better written.)  John Goodman is a hoot as the voice of Igon Siruss, a Jabba the Hut type character.  Clive Owen is the Commander and, if anyone is miscast, point the finger at him. Ethan Hawke has a small, forgettable part as the pimp for Bubble.   Rihanna provides a very interesting take as Bubble, a shape shifting entertainer.

Is this a great movie?  No.  But, after Dunkirk, it is a pleasant diversion.  This is the kind of movie that you can just sit back and relax.  There is enough going on that you may even want to see it a second time, not because of its great story or acting, but because Besson packs in a lot of visual treats.  Bottom line–a fun summer movie, especially if you like the genre.

4 thoughts on “Valerian and the City of a Thousand Planets — 3.5 Gavels 55% Rotten Tomatoes”