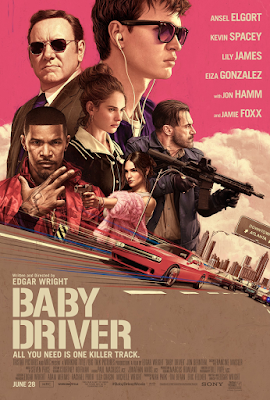 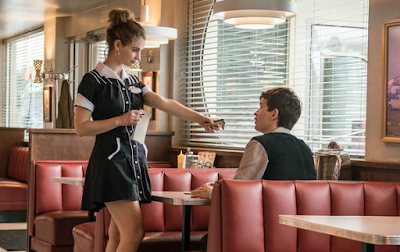 What do you remember most about Forrest Gump?  For me, it is the soundtrack.  Given the accolades that the soundtrack gets in Guardian of the Galaxy, it is a major surprise that directors don’t pay more attention to the music.  John Williams is renown for his music in Star Wars.  While most of the music in Baby Driver is not original, it is the icing on the cake.  The blend of the music with the action is terrific; this is a must-see movie.

Baby is the driver for an organized gang of robbers masterminded by Doc.  Doc blackmails Baby in continuing to drive even after his debt is paid.  Baby meets Debora and they dream of driving westward and listening to music in a car they can’t afford.  Along with Buddy, Bats, and Darling, there is one more heist before he can leave.  But, will he be able to protect Debora and his deaf, invalid foster parent.

Baby (played by Ansel Elgort of Divergent and The Fault in Our Stars) is hearing impaired and uses the music to focus. His miming and dancing to the music are one of the unexpected pleasures.  Lily James, looking completely different than in The Exception, is the naive and trusting girlfriend.  After playing the crooked President in House of Cards, Kevin Spacey (Doc) is almost typecast here.  I thought both Jon Hamm as Buddy and Jamie Foxx as Bats were over the top, but both probably enjoyed the opportunity to play bad guys for a change.

Although we see lots of car stunts in various movies (Fast and the Furious and James Bond come to mind), there are some really impressive driving action scenes in this flick. Baby’s history is fully explained, and taken with the bullying by his “partners in crime,” becomes a sympathetic character. Exploring the dynamics within a gang of thieves is not a new concept, but Baby’s “disability” gives it somewhat of a new take. And, the movie has a not quite Hollywood ending.  Overall, this movie should do very well at the box office, especially with a budget of only $34 million.  Let’s hope it is not crowded out by Despicable Me 3.  (You should have my review on that movie by Saturday morning.)