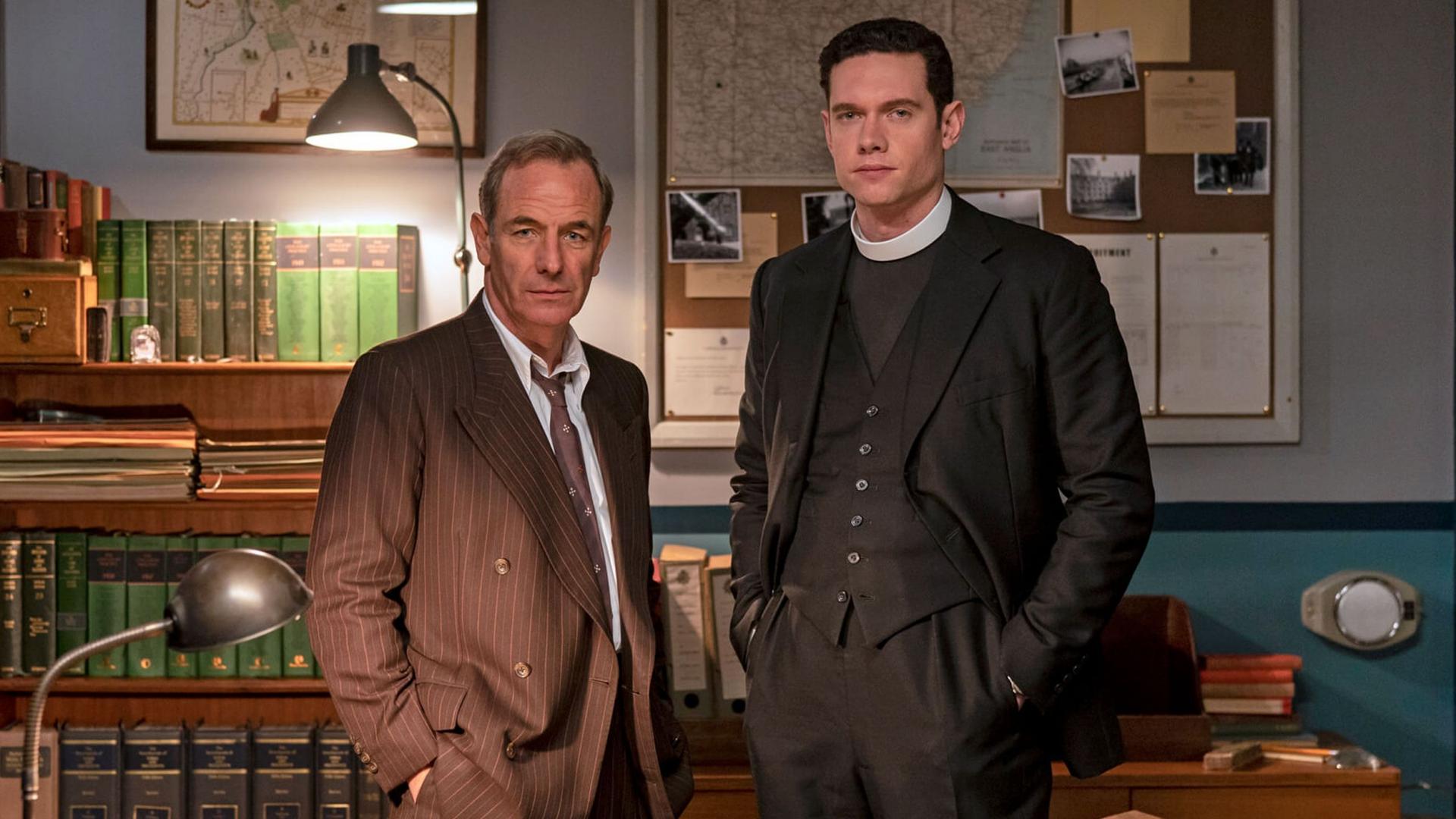 Geordie, “jilted by a frisky vicar,” starts off Grantchester 7 with a bang Sunday nights on PBS. All the folks are back with a few new ones for good measure. Certainly, the females appear to be taking on a larger role this year. Will has a new love interest in Maya (below yellow dress) who just happens to be engaged to Geordie’s new boss, a stickler for procedure. Cathy moved out with the kids, and niece Bonnie (below) moved back to help out. Will she attract Will’s attention, too? Between the liquor, murder investigations, and sex, when does he have time to prepare his sermons?

Now defrocked Leonard opens a coffeehouse but is still a close confidante of Mrs. C. When Jack suggests she might be having an affair, Leonard scoffs saying ‘she thinks it’s a sin to step on an ant.” And then we have Miss Jennifer Scott (below black dress), police secretary, who goes unnoticed by everyone except Geordie. Is she the smartest and most “conspiring” of the lot? All in all, this is a simpler time, except for all the murders and other shenanigans regularly occurring in Grantchester. If you like PBS, Grantchester 7 fits right into the mold with six new episodes. I give the series 3.5 Gavels and the first two episodes average 7.5/10 IMDb.

In Episode One, Edmund Fitzgerald (no, not Gorgon Lightfoot’s Edmund Fitzgerald) returns to the family estate to reclaim his inheritance after 20 years abroad. At first thought to be a tramp, he’s found dead of heart failure. Geordie’s new boss is ready to move on, but our intrepid investigators smell a rat. In Episode Two, Lester Swinnerton dies in his own bed. It turns out he received a bullet to the neck. Swinnerton’s sexual proclivities are no secret to his wife, but did she want him killed? Was he about to run away with another woman? Do not fear. Nothing gets past Geordie and Will, except maybe Maya, Cathy, Jennifer, and Bonnie.

Kacey Ainsworth, as Geordie’s wife, Cathy, is determined to make him value her as more than a housekeeper. Melissa Johns, as Miss Scott, is in the same boat. Why won’t the men see her worth? Are you sensing a pattern here? I like that fact that Maya’s (Ellora Torchia) fiance, Geordie’s boss, takes an instant dislike to Will. But, you sense that Charlotte Ritchie (Bonnie) is about to step forward in a big way.

It’s a cliche but Grantchester 7 is chicken soup for the soul, just like All Creatures Great and Small and a host of other PBS offerings. I’ve now forgiven Grantchester 6 for substituting Tom Brittney for James Norton as the vicar. Amazing how time heals all wounds.

“For its seventh series, Grantchester took us back to the sweltering summer of 1959, but as ever in this Cambridgeshire village, nothing was hotter than Reverend Will Davenport.” inews.co.uk

Not unusual for a series of this length, reviewers stop critiquing it. If the audience likes it, then why bother? And, it does appear Grantchester 7 rolls toward Grantchester 8.