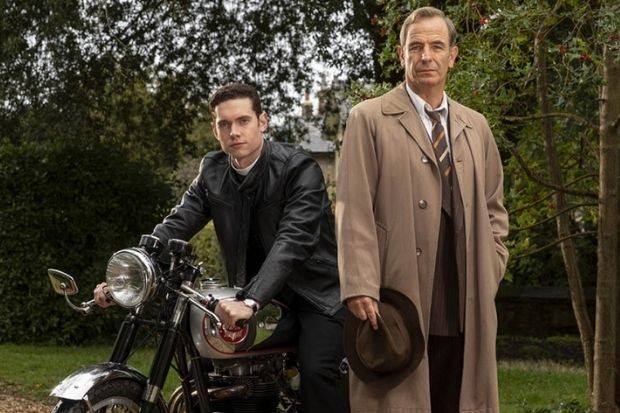 After the first episode of Grantchester 6, it felt like a fish out of water. Will I ever be able to forgive Grantchester for replacing James Norton? No one does angst quite like Norton. Still, as shown by my previous review of Grantchester, I remain a big fan of the eight-episode PBS series, now in its sixth season. Since the Anglican vicar and his detective buddy solve murders week after week, I’m sure they deserved a holiday. And, remembering that Grantchester 6 is set in the 1950’s England, holidays looked much different, sort of like Midge in The Marvelous Mrs. Maisel. So, put the handsome Reverend on the back of a motorcycle and off we go to the Merries Holiday Park.

But, it’s not just Rev. Will Davenport on vacation, it includes the whole crew. DI Geordie Keating brings wife and three kids describing the drive as “three hours of hell.” Gay curate Leonard Finch brings his “friend” Daniel Marlowe. Finally, one mustn’t leave behind housekeeper Sylvia Chapman and new husband, Jack. The gang’s all here. All this begs the question whether it’s really a holiday if all your workmates come along. One thing is certain. All think our handsome vicar needs a girl in his life. Voila! But, which will take precedence, the dead body or the after-dark dip into the lake? Does Rev. Will wish he was back at his church? I give episode one of Grantchester 6 3.5 Gavels but expect it to dramatically improve. It’s overall Rotten Tomatoes rating sits at 95% with a complete IMDb score of 7.9/10.

Babs Reeves inherited Merries Holiday Park from her father. Upon marriage, it became her husband’s (Roy) property and she is not happy how he runs it. Sid Danker brings his wife, Margie, back to to the park to remind Roy that “he got the girl.” Too many unhappy memories, Margie would rather be in the Mediterranean. Roy promised to make Sunny West a star, but finds her useful in other nefarious ways. When one ends up dead, the local cop thinks its a “dodgy ticker.” Will convinces Geordie that the holiday must be put on pause. Or, as Cathy Keating puts it, “you can’t go five days without a carcass.”

Replacing James Norton is Tom Brittney (Greyhound). It’s not quite the same as replacing Sean Connery with Timothy Dalton, but you get the picture. Since Rev. Sidney Chambers moved to America, maybe he’ll come back for a holiday sometime. In the meantime, Rev. Will will have to do. Robson Green remains as the steadfast friend of Will even as they smoke and drink together, 1950’s style. As DI Geordie Keating, we expect our detectives to live the hard life. It’s somewhat startling for the vicar to do the same.

The LGBTQ life is frowned upon in 1950’s England by both the Church and the State. For a while now, Leonard’s relationship with Daniel skirts discovery by the authorities, threatening his freedom and livelihood. Episode One sets up further complications down the road. Blackmail rears its ugly head at Merries Holiday Park. It seems the Brits are quite proficient at it, as they are at murder. Check out Grantchester 6 on Sunday nights.

“I wasn’t around in 1958, but I find it hard to believe that there was ever an Anglican clergyman in those days who looked so buff or so Brando-esque on a motorbike.” The Guardian

“Robson Green and Tom Brittney return for a sixth series of the wildly popular, 1950s-set crime drama, but the modern lens is jarring.” The Telegraph

“Do you know how many men it takes to wallpaper a bedroom? It depends on how thinly you slice them.” After a go at comedy on holiday, I suggest Will and Geordie stick to solving murders. FYI, Episode Two is much better.