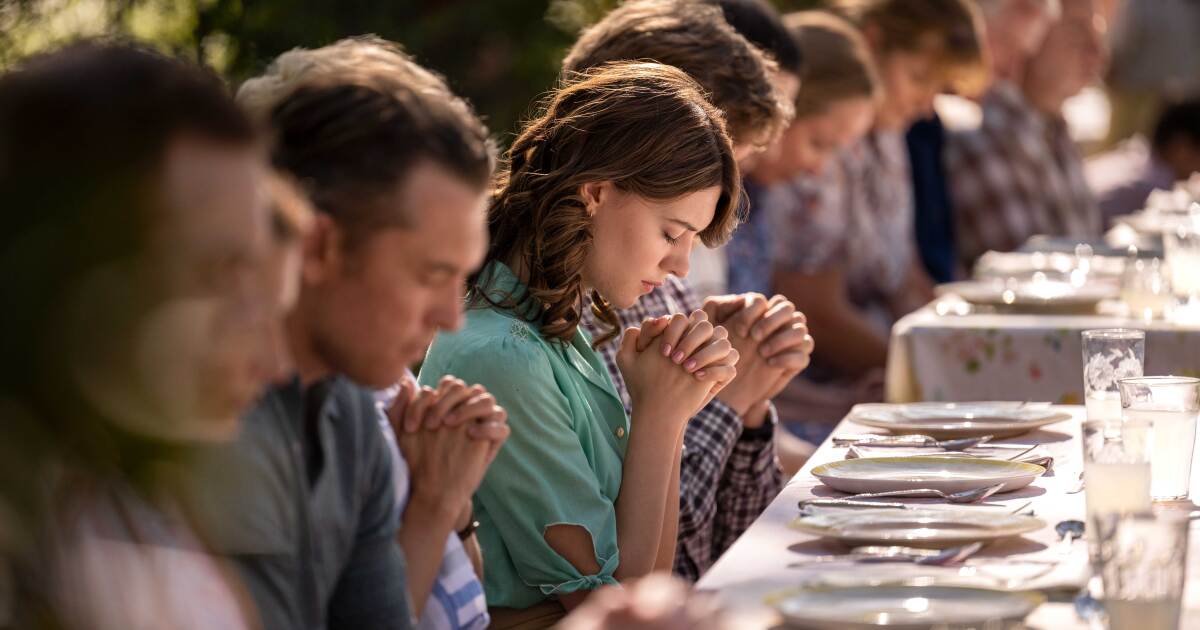 If The Offer enrages the Mafia, the Mormons will feel equally insulted by Under the Banner of Heaven. The difference is that the former is light and funny, the latter dark and sinister. Knowing very little about LDS and it’s history, the first two episodes on Hulu caused me to wonder if this was a hit-job on the Mormon Church. Or, as their public affairs director puts it, “after reading the book, one could be forgiven for concluding that every Latter-day Saint, including your friendly Mormon neighbor, has a tendency to violence. And so, Krakauer (the author) unwittingly puts himself in the same camp as those who believe every German is a Nazi, every Japanese a fanatic, and every Arab a terrorist.”

Based on the true story of the 1984 murders of Brenda Lafferty and her 15 month old daughter, Under the Banner of Heaven, not only investigates the horrific crime, but also explores the history of the Church and its fundamentalist offshoots. On Thursdays through June 2nd, the seven-part series opens as police find Brenda’s and Erica’s bodies at home in fictional East Rockwell. (The murders actually took place in American Fork, Utah.) Covered in blood, husband Allen is quickly taken into custody. His interrogation by fellow Mormon Detective Jeb Pyre form the background for the flashbacks, not only to the crime, but also all the way to founder, Joseph Smith, and his troubles beginning in Kirtland, Ohio. I give Under the Banner of Heaven 3.5 Gavels. It receives an 84% Rotten Tomatoes rating with a 7.4/10 IMDb score.

A second place finisher in the Miss Twin Falls, Idaho 1980 contest, Brenda Wright is “the perfect Mormon girl.” She will study broadcast journalism at BYU and read the news on TV. Except, she falls in love with Allen Lafferty, youngest of six brothers of Amman Lafferty, the patriarch of the family known as the Kennedys of Utah. Amman immediately notices that Brenda “didn’t see the rules like the rest of us did. Women taught to be obedient, she wasn’t like that.” In short order, Brenda will run afoul of the Patriots for Freedom.

Andrew Garfield (Spider-Man: No Way Home) stars as Det. Pyre, a Mormon who now “sees things he’s only heard whispered about.” Partner, Det. Bill Taba, is certain the husband is the culprit, at least until he runs into the Patriots for Freedom. Gil Birmingham breaks out from his Thomas Rainwater role on Yellowstone. Following an outstanding performance in Normal People, Daisy-Edgar Jones continues to impress as Brenda Lafferty. Could the Utah Mormons be so different from the Idaho Mormons?

Actually, Under the Banner of Heaven is done quite well. Too well, one might argue. For one man’s take (Jon Krakauer) on a murder and LDS, it’s an educational trip. Overall, it’s a little, really a lot, too dark for me. “We will tread on the ashes of the wicked,” so sayeth the Patriots of Freedom. You might want to steer clear of these folks next time in Utah.

“True-crime thrillers rarely hit as hard as this streaming series that stars a superb Andrew Garfield as a Mormon detective investigating a double murder that indicts a fundamentalist sect within the church. Believe this: It will take a piece out of you.” ABC News

“As a whole, the series is almost always discomforting, relentlessly ominous and occasionally nauseating.” Guardian

On to Bosch and Tehran for me. Hmmmm. More fundamentalists in the latter.