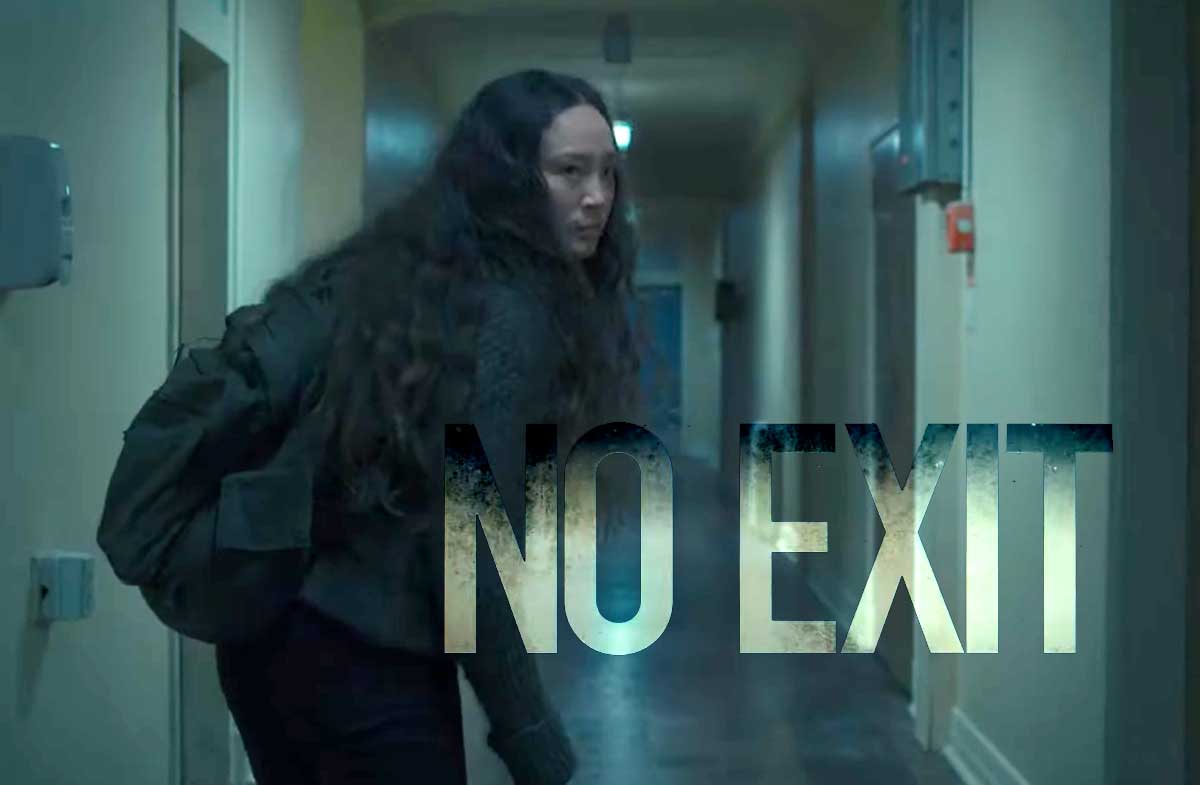 Put No Exit in the category of Least Thrilling Thriller. Purportedly based on a best-selling book, the viewer would hope to get better production values. From a fake snowstorm to wind that doesn’t blow your hair, Allstate commercials give Dennis Haysbert (Kodachrome) better sets than this pretend Visitor’s Center. C’mon this man was President of the United States on 24. He saved our bacon over and over on The Unit. He deserves better, much better. His deep, deep voice still shines through, though.

Darby is an addict, a seven-time rehab failure. It’s either rehab or jail, although she is extremely cynical about the effectiveness of rehab. She receives an urgent call that her mother is in the hospital suffering from a brain aneurysm. So tired of her many relapses, sister Devon doesn’t want her to come to the hospital in Salt Lake City. “I’m not bailing you out of rehab.” Darby steals tools from the rehab center, then steals a car. Nothing will keep her from her mother’s bedside. She doesn’t account for the weather. From this slow start, No Exit muddles along to its ultimately gory conclusion. Most of you will likely have dozed off. I give No Exit 2.5 Gavels and it receives a 57% Rotten Tomatoes rating with a 6.1/10 IMDb score.

The road ahead closed due to the storm, a cop directs Darby to a nearby Visitor’s Center closed for the winter. Only four others are present, an older couple, Ed and Sandi, a long haired dweeb, Lars, and a bearded Ash. As she tries to get cell phone service, Darby discovers a young girl tied up in a van. Clearly, one of the folks in the Center is the kidnapper, but which one? A game of B___S___ gives the first clue as to whom it might be. The suspect has a gun, the victim is sick, and the police will not be coming. Can Darby trust any of the others?

Fresh off her performance in The Sky Is Everywhere, Havana Rose Liu gets the starring role as Darby. Actually, she does a nice job as a recovering drug addict although the role doesn’t allow much in the way of range. Seen in The Falcon and The Winter Soldier, Danny Ramirez is Ash who hides his own secrets even as he discloses Darby’s. From Winter’s Bone to Palm Springs, Dale Dickey plays the same character, here as Sandi. Typecast, she is.

A popcorn movie is “a film that is perceived as entertaining but lacking in depth or artistic merit.” That might be apt, except for the entertaining part. I’m never a fan of nail guns used in films, although it does seem to be a popular weapon.

“A good potboiler needs to be airtight, or it needs to be fun enough to rise above its shortcomings. Unfortunately No Exit is neither.” Detroit News

“As the film winds toward its bloody climax, its unclear what the point of it all was.” Los Angeles Times