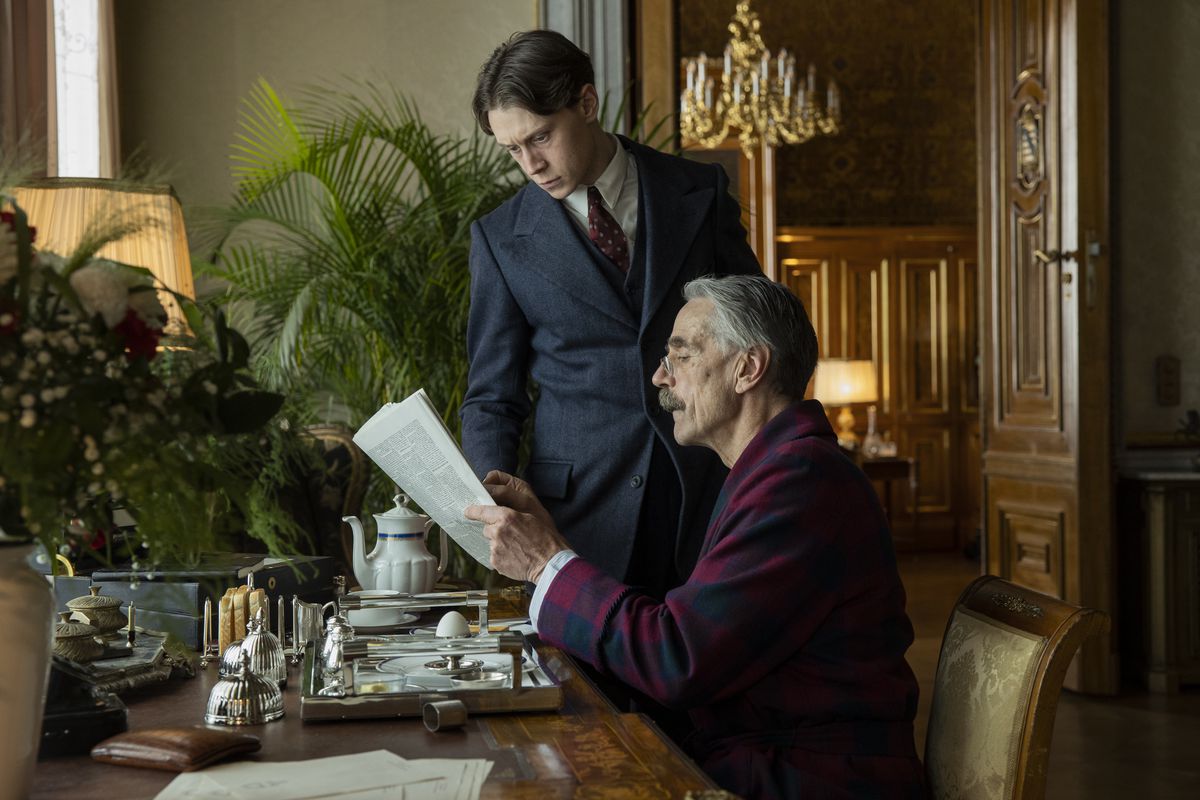 Munich – The Edge of War is masterful as film, but dreadful as propaganda. One might imagine that Neville Chamberlain has a new Public Relations expert in his employ. First, the good. If the viewer didn’t know a bit of history, Munich -The Edge of War reminds one of Oslo. Based on a true story, that movie placed you on the inside of backchannel negotiations for 1993 Oslo Peace Accords. With the creation of two low level diplomats, one English and one German, Munich – The Edge of War gives a similar feeling during the 1938 Munich Agreement. The stakes are high, the tension even higher. So why make Chamberlain something he wasn’t?

As explained in History vs Hollywood, “Jeremy Irons‘ (House of Gucci) kind, sensitive, and cunning Chamberlain is a contradiction to who the leader actually was—a gullible, arrogant, vain, vindictive man with the foolish notion that he could outsmart Hitler.” So, was Chamberlain a man who believed peace with Hitler was possible? Or, did he believe that even if a fool, it was a small price to pay to keep England out of war? Did he really think that the argument over the Sudetenland was a small border dispute?

Appeasement is such an ugly word, forever associated with Chamberlain. Interestingly, are there parallels to Putin and Ukraine, and Xi and Taiwan? As a fictional drama Munich – The Edge of War would receive 4.0 Gavels but its revisionism brings it down to an award of 3.5 Gavels. Rotten Tomatoes provides the movie with an 84% rating and it garners a 6.9/10 IMDb score.

Hugh Legat works as the private secretary for the Prime Minister while Paul von Hartmann interprets foreign copy for Hitler. Friends at Oxford, a dispute over the legitimacy of Hitler led to a falling out. In 1938, Paul comes into possession of 11/3/37 memo where Hitler outlines his intent to conquer much of Europe, thus belying his public stance of peace. Paul hopes to use the memo to persuade Chamberlain not to cede the Sudetenland. Hugh is his only chance. Death awaits if discovered.

Seen in 1917, few have the innocent face of George MacKay. As Hugh Legat, he makes the perfect, imperfect spy. Not seen before, but making quite an appearance, is Jannis Niewohner as Paul von Hartmann. No one goes under a bigger transformation, from supporter to would-be assassin. Both accurately portray the innocence of student/youth come face-to-face against the hard truth of real world decisions.

Would the empire have been destroyed if Neville acted differently in 1938? While the Munich Agreement did buy time for England, was it a mistake not to put the country on “war footing?” What about the poor Czechs who were not even invited to Munich? Overall, Munich -The Edge of War gives much to think about.

“Munich is made at a moment in history when Chamberlain’s fears, and his follies, are entirely more tangible than they were a few decades ago. And when that realization hits you, the movie’s tension never lets go.” Den of Geek

“Munich would be better grounded — and more timely — if it spent less effort honoring Chamberlain’s noble hopes and more time examining why Chamberlain, Britain and Europe weren’t more awake to the clear and present danger.” AP

Find this one on Netflix. History buffs might grit their teeth, but drama fans should enjoy it.