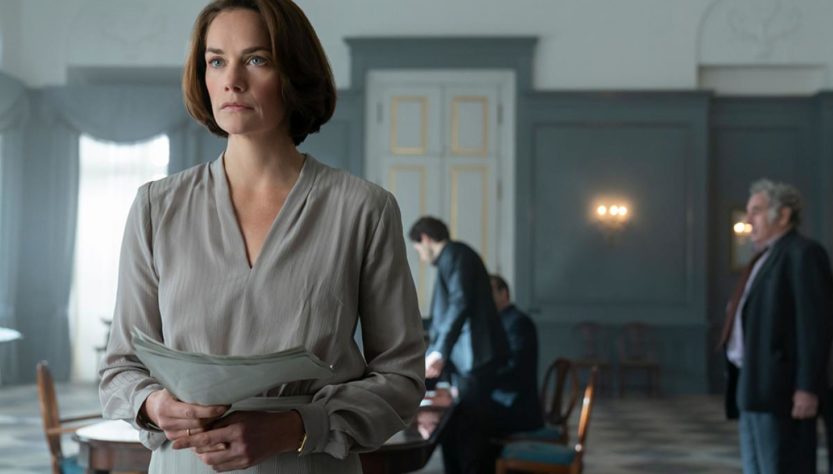 Raise your hand if you can’t wait to see the back channel negotiations to develop the 1993 Oslo Peace Accords. It was not high on my priority list either. As Mona Juul expressed her frustration with the Israelis and the Palestinians, “fifty years of conflict and nothing changed. People do not believe you can change.” Nearly thirty years later, the weary public still has the same belief. Nevertheless, HBO’s Oslo will be one of the best dramas you will see this year. Based on the unlikeliest of true stories, Oslo started out as a play off-Broadway in 2016. It moved onto Broadway one year later and received at least six Best Play Awards, including a Tony.

Just how does a Norwegian junior diplomat and a sociologist/head of a think tank get the Israelis and Palestinians to the table? Israeli law prohibits official contact between the two. An American-sponsored negotiation drags on in London for the past two years, going nowhere. The PLO and Arafat sit in Tunis on the verge of irrelevancy, having angered their Arab friends by backing Saddam Hussein in the Iraq War. The Intifada rages on, about to enter its sixth year.

Back channel negotiation is always risky. If negotiation is not done openly, those affected may believe they are sold out and not accept the results. On the other hand, if the parties do not meet face-to-face, can there ever be an agreement? A secret meeting in Sarpsburg, Norway and a truly talented cook can work wonders. I give Oslo 4.0 Gavels and it receives a 75% Rotten Tomatoes rating with a very early 6.5/10 IMDb score.

Caught in a crossfire in Gaza during a two year diplomatic assignment, Mona Juul knows a little about the Israeli-Palestinian conflict. In December 1992, her husband, Terje Rod-Larsen, suggests a back channel negotiation to an Israeli Deputy Foreign Minister. Reluctantly, he agrees but can only send two professors to the table in a wholly-unofficial capacity. Meanwhile, the Finance Minister of the PLO sits in his hotel room in London complaining that he is not allowed at the official negotiations. He has not been “home” since 1967. Now, Juul must convince the Norwegian Secretary of State to issue visas in fake names so no one finds out about the meeting. Above all, do not tell the Americans!

Who is hotter right now than Ruth Wilson? Superb in both Luther and Mrs. Wilson, she stars as Mona Juul, one of the very few trusted by both the Israelis and the Palestinians. Much less cautious than his wife, Larsen is acted by Andrew Scott (1917). His one lie just might derail the whole process. Seen in The Bureau, Salim Dau is the PLO Finance Minister. He’s never met an Israeli face-to-face. The confrontations are “explosive,” no punches pulled.

Wonderfully acted, the viewer feels the hate, sees the distrust in the eyes, of the parties. As they eat (waffles), drink (Johnnie Walker), and talk together, old grudges remain. Slowly, the future becomes more important than the past. Ultimately, will the PLO recognize the legitimacy of Israel’s existence? Will Israel accept the PLO as the recognized voice of the Palestinians?

“The story really gets going once they manage to bring Israeli and Palestinian negotiators to an isolated mansion, Borregaard Manor, in a beautiful setting…” Jerusalem Post

“The way in which it builds and peels suspense, all while paying tribute to those who took the risks to open a door to peace, makes it one of the year’s most impressive offerings.” The National (UAE)

Shimon Peres complains that the Americans once messed up his proposed peace deal with the Jordanians. Wait until you see what happen when he sends his lawyer to the table to clarify the “mushy” deal with the Palestinians. Didn’t Shakespeare write “let’s kill all . . . “