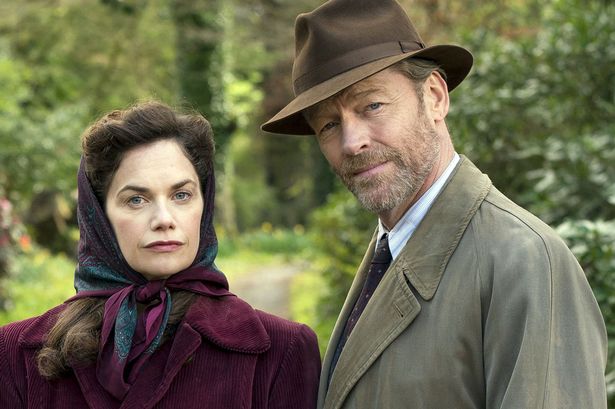 Like Kit Harrington in Gunpowder, I’m certain that Ruth Wilson was only to happy to produce and star in the story of her ancestor, in this case, grandmother Mrs. Wilson. The photo below encapsulates the tale: “Bigamy, secrets and lies – web of deceit of the novelist spy.” Seven children by four wives while writing 22 novels, in MI6, and later under the watchful eye of MI5, was Alexander Wilson a pathological liar or a patriot set up by double agents? Ultimately, Mrs. Wilson finds faith and forgiveness, but did she ever know the real Alec? To date, MI6 still refuses to release his file. Is it because that it contains state secrets, or because it covers up embarrassing mistakes?

Intrigue is the name of the game in the three-part Mrs. Wilson from Masterpiece available through Amazon Prime. Wife number three, Alison slowly peels off the layers of her beloved husband’s life as his other wives slowly make themselves known. None knew the extent of his deceptions; all sought to protect their children. Each child held fond memories of their father, certain of his love, no birthday ever forgotten. Eventually, Mrs. Wilson, the film, ponders whether the service to his country was worth the lies to the women. Judge for yourself. I give the series 4.0 Gavels and it receives a 91% Rotten Tomatoes rating with a 7.5/10 IMDb score.

In 1963 London, Alison Wilson finds her husband dead on the floor of a heart attack. After 22 years of marriage and two grown children, imagine her shock when Gladys Wilson knocks on the door to talk to her husband. Certain there was a divorce, Alison contacts their former MI6 employer, Coleman. Advised to “leave it alone,” Alison sees Dorothy Wick at the funeral and meets Alec’s handler in India, Shahbaz Karim. Nothing about Alec is as it seems.

From The Lone Ranger to Jane Eyre, Ruth Wilson possesses an impressive resume which includes Tony, BAFTA, Olivier, and Golden Globe nominations and awards. Here, she does grandma proud. Iain Glen (Alexander Wilson) is everywhere, most recently in The Windemere Children and Black Beauty. Is anyone more cloak-and-dagger than Fiona Shaw (Enola Holmes)? As Coleman, she exudes the enigmatic.

Alec warned Alison that he was “wholly unsuitable” for her even as he was trying to seduce her. Did he warn the others? Overall, Mrs. Wilson could be cut to two episodes but given the quality of the acting, that is really a minor complaint.

“It is a great story – we may know whodunnit but the how and the why tugs us onwards – but it is also a slow, melancholy meditation on how much and how little we can know about each other.” Guardian

“I hate to have fun at the expense of others, but Mrs. Wilson, a new Masterpiece miniseries about marital deceit, is all kinds of addictive.” Boston Globe

Maybe we should start a letter campaign to MI6. Like me, you’ll want to know more about Alexander Wilson.