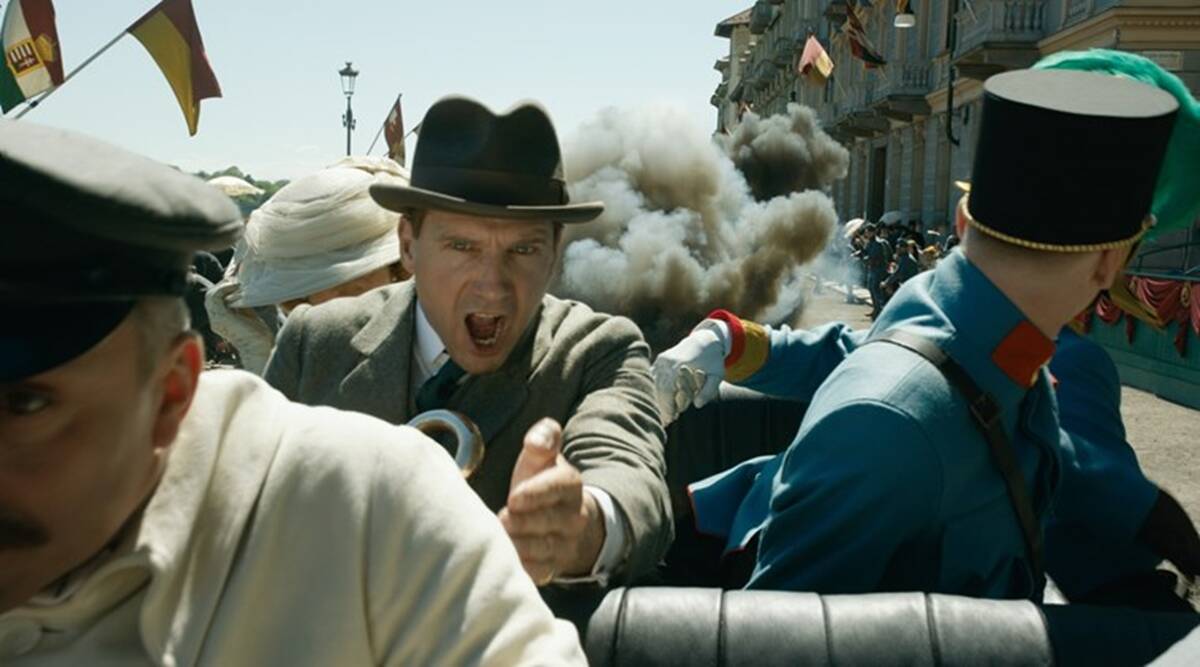 Make no mistake, The King’s Man looks every bit the part of a $100 million film. From gorgeous sets to elaborate costumes, and from unique locations to well choreographed fights, it will not disappoint the eye. Yet, as with many sequels, The King’s Man lacks the zip of its predecessors and feels a bit stale. Of course, no franchise can exist without an origin story. And, The King’s Man takes us back to the beginning. It’s 1902 and Orlando, Duke of Oxford, and his wife and son are in South Africa during the Boer War. During a sniper attack and with her last breath, Emily makes Orlando promise that Conrad will never see war. Pacifist Orlando sets up a spy network to prevent England from involvement in wars.

Twelve years later, Orlando’s spy network consists of himself and two servants, Polly and Shola. Still, they are entrusted with protection of Archduke Franz Ferdinand in Sarajevo. Successful once in saving his life, a second attempt kills the Archduke and sets off The Great War. Who is behind this dastardly deed? The head of the snake must be cut off. But, is Orlando the man to do it? The King’s Man takes us to Rasputin and Russia, the Western Front in France, and to the mountains of Italy, all magnificently filmed. Certainly, the director does not skimp on the mountain goats, one becoming a hero of sorts. Still, it all becomes too predictable, even with treachery lurking everywhere. I give The King’s Man 3.5 Gavels and it receives a 42% Rotten Tomatoes rating with a 6.8/10 IMDB score.

Who will benefit if The Russian Empire no longer fights on The Eastern Front? Why are the Americans hesitant to join the war? A man known only as The Shepherd seems to be pulling the strings of these large empires. Would Germany be stupid enough to encourage Mexico to attack the United States? Is President Wilson subject to blackmail? King George seeks the assistance of one man, Orlando, Duke of Oxford. In exchange, he will pull Conrad out of France. But, the young are headstrong, aren’t they?

Like Liam Neeson, at age 59, Ralph Fiennes (No Time To Die) is getting a bit old to be tossed around like a bean bag. Nevertheless, here he is Orlando, out to save the world. Other than shooting a couple of bad guys, Gemma Arterton (Summerland) doesn’t get a whole lot to do. However, as Polly, she does get the best line. “Boys are always so messy.” Rhys Ifans (Spider-Man: No Way Home) makes the best impression as Rasputin. Nice beard!

For sure, The King’s Man pales in comparison to World War I movies like 1917. A mid-credit scene introduces Hitler to the franchise. While a fourth Kingsman is in pre-production with Harry Hart and Eggsy, does this mean that the arc with Fiennes and Company will continue?

“It is downright diabolical for Vaughn to make audiences even imagine a sequel to this unnecessary prequel simply to see if can be as outlandish as promised.” Los Angeles Times

The King’s Man will be on Hulu on February 18th. If you haven’t already seen it at the theater, I’d wait and stream it.