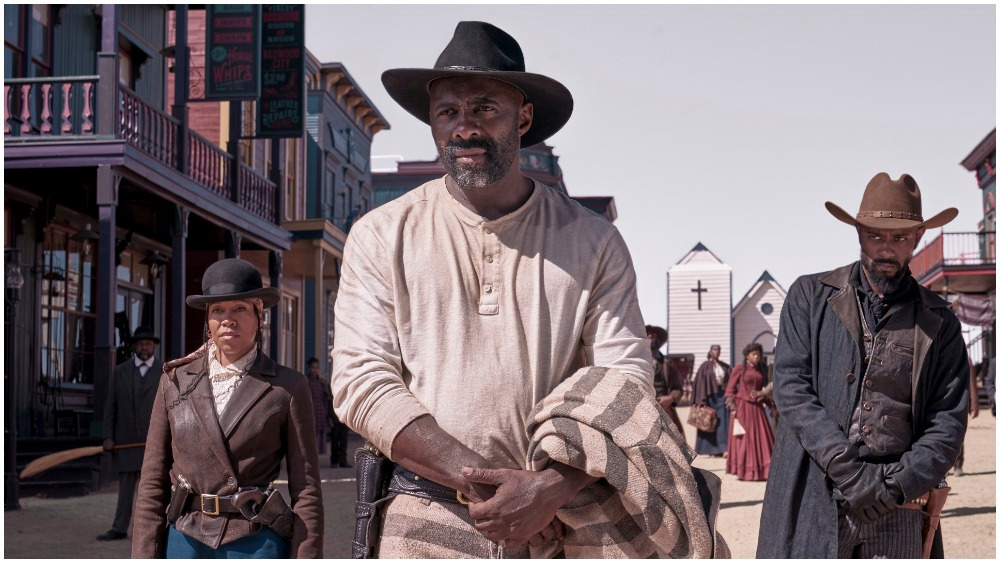 The Harder They Fall is just John Wick in the Wild West with better actors, better cinematography, much better music, and the same level of absurd violence. At an 88% Rotten Tomatoes rating, the critics love the film billed as one of the few all-black cast member Westerns. With a 6.0/10 IMDb score, the audience knows it needs a better story. Too long at 137 minutes, The Harder They Fall has its moments. For example, Nat Love tells the innocents in a bank “Robbing banks is easy. The hard part is doing it without killing.” And that is about the only time in the whole film someone is not brutally gunned down.

At its essence, The Harder They Fall boils down to a revenge flick with a slight twist at the end. Rufus Buck killed Nat Love’s parents when the latter was only ten. He also cut Nat’s face “so I know that face when you come back to find me.” Years later, Nat still hunts down those involved knowing that the main culprit, Buck, will likely die in prison. A man of “morals,” Nat will not rob banks, only rob the robbers who rob banks. Still, he has a $10,000 bounty on his head.

Filmed in Santa Fe, some of the scenery is breathtaking. Yet, it is the music written into the film that will grab your attention. Jay-Z, Seal, and CeeLo Green are a few of those featured. Characters are allegedly based upon real lawmen and outlaws of the West. Given a little backstory on those men and women and I might agree with the critics. Instead, my vote goes with the viewers and I give The Harder They Fall 3.0 Gavels.

Ghastly Gertrude aka Treacherous Trudy and her gang stop the train transferring Rufus Buck from one prison to another. Killing all but one, Buck and Company head to “his town,” Redwood City. Learning that Buck escaped, Nat Love is ready to exact his revenge, notwithstanding the long odds against him. Stagecoach Mary aka Wolf Lady aka Coyote Woman does not intend to let him go alone even though he jilted her in the past. Marshal Bass Reeves interrupts plans by arresting Love for past misdeeds. But, it seems the Marshal has his own agenda. Then again, everyone seems to have their own agenda.

Seen in Loki and White Boy Rick, Jonathan Majors plays Nat Love while the better known Idris Elba is the menacing Rufus Buck. You just saw Elba on a horse in Concrete Cowboy. He needed more screen time here. Actually, the women are much more interesting. Regina King and Zazie Beetz, as Trudy and Mary, respectively, steal the show from their male counterparts. Even they get overshadowed by Danielle Deadwyler as Cuffee. She has the perfect name for a film of no mercy and violence.

When Mary and Trudy get in a tussle to the death, a slightly altered League of Their Own saying came to mind. “There’s no biting in fistfights.” Take note of the sets in The Harder They Fall. Douglastown, Redwood City, and Maysville are all colorful and recently painted, quite the opposite as one would expect in the Old West. Of course, everything is a contrast to the mindless violence.

“There’s a hint at the end that we might see some of these characters again. Can we put in a request for a just a few less bullets, in favor of emotional firepower?” Associated Press

“Surely the truth (or something close to it) of who these men and women were must have been more fascinating, and more worth mythologizing, than what transpires in this strained mashup.” Los Angeles Times

In some cases, the whole is better than the sum of its parts. Somehow, The Harder They Fall achieves the exact opposite.