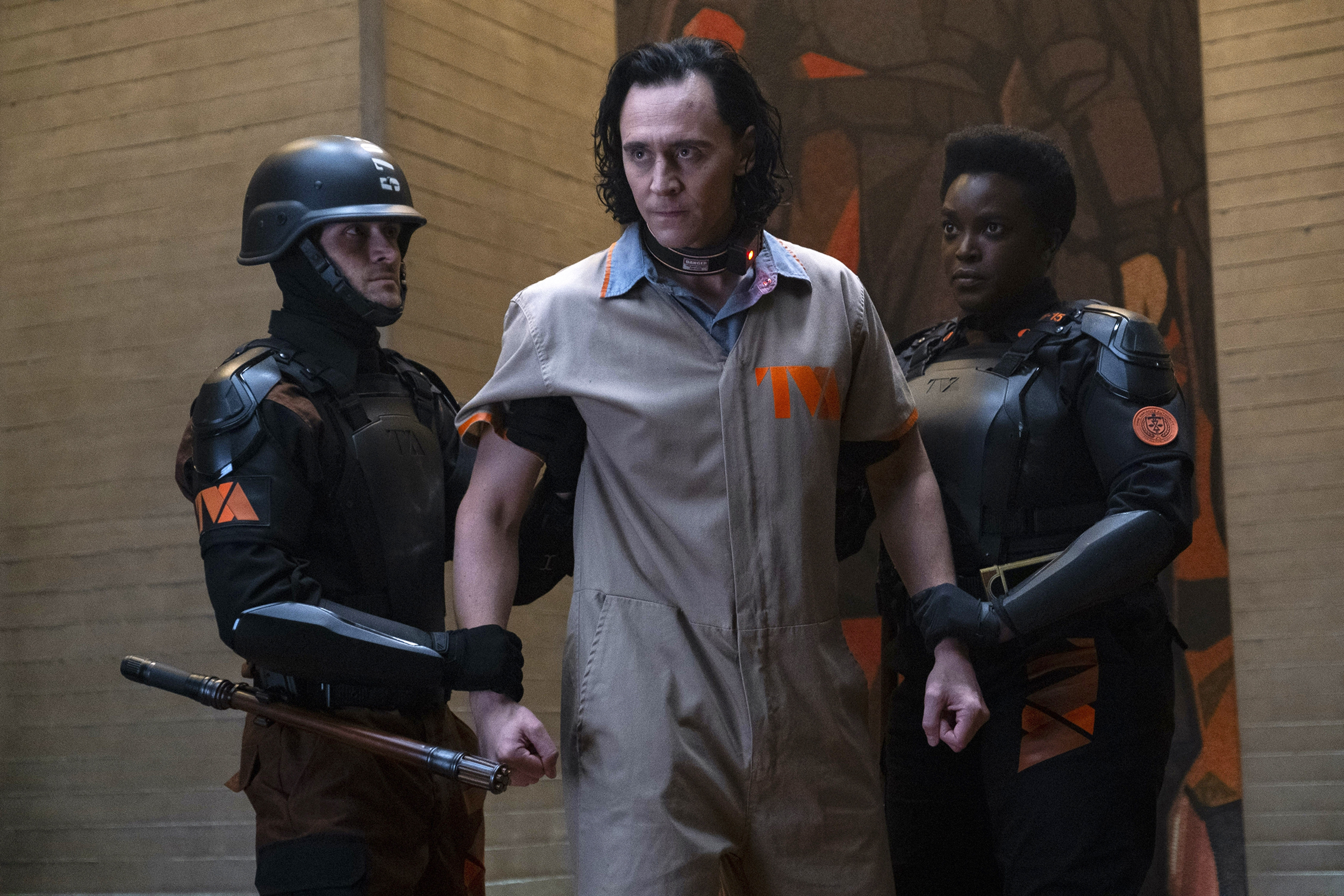 While the start of WandaVision was just plain weird, Loki‘s beginning intrigues. Most of the initial episode is in interrogation at the Time Variance Authority, but time shifts from 1549 to 1858 give hints that Loki will not be tied down to one place and one time. Such is appropriate for the “god of mischief.” Are there really only going to be six episodes of this Disney+ offering? So much to cover, so little time for this “god, born to rule.” Except, this collar provided by the TVA tends to put Loki in his place. Or, as Agent Mobius snidely reminds Loki, “for someone born to rule, you sure do lose a lot.” Ouch!

The Time Keepers are the “divine arbiters of the universe.” Woe be it to the variants, those who violate the Sacred Timeline. They will be judged, and likely re-set. Arrested for crimes against the Sacred Timeline, Loki is brought before Judge Ravonna Renslayer. At the same time, Hunters for the TVA are being attacked throughout time. What does Agent Mobius see in Loki to think that he can stop the killings? After all, no one can trust Loki. “You were born to cause pain and suffering and death, so others can achieve the best version of themselves.” This bad boy is far from a paragon of virtue. And that is why we will follow and enjoy his character arc. It may be necessary to revise the rating later in the season, but its promise grants it 4.0 Gavels, a 94% Rotten Tomatoes rating and an outstanding 9.3/10 IMDb score.

In 2012 New York City, Loki steals the Tesseract to escape but ends up in the Gobi desert in Mongolia. Hunter B-15 arrests him and re-sets the timeline. The bureaucracy of the TVA will deal with Loki which include watching an excruciating video of Miss Minutes, enduring long TSA-type lines, and signing endless, meaningless forms. Loki’s claim that the Avengers are the real bad guys falls on deaf ears. Agent Mobius specializes in the pursuit of dangerous variants. He insults Loki by claiming he is a mere nuisance. So, of what use is Loki to him?

Owen Wilson (Father Figures) is the perfect foil opposite Tom Hiddleston (The Avengers – 2012). His Mobius is laid-back, confident, unimpressed by the “god” sitting across the table. Not only has he heard it all before, he’s got it on video. In the movies of the 1930’s, Hiddleston’s Loki is the kind of smarmy villain that the audience would boo and hiss. In other words, this is a match made in Marvel heaven. Presumably, Gugu Mbatha-Raw (The Whole Truth) gets a much bigger role as Judge Renslayer, but that remains to be seen.

Time altering shows are generally not a favorite of mine. The writers tend to play too many games for my taste. For some reason, Loki seems to break the mold. I’ll withhold final judgment and eagerly await episode two. Besides, just what did happen in Oklahoma in 1858, not to mention Aux-en-Provence, France in 1549?

“The Beetlejuice-like atmosphere and wildly creative details of the TVA are hugely appealing, as is how the exploration of time will challenge Loki to assess/reassess his actions.” Perri Nemiroff

Put this one on your calendar for the next five Wednesdays!