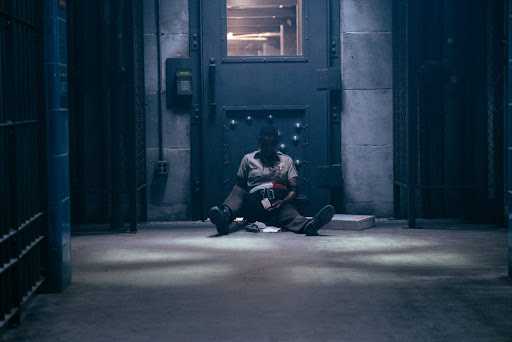 In Copshop, if you are wounded and in need of help, do you trust a con man or a hired killer? The names to lure you into the theater are Frank Grillo and Gerard Butler. The real stars are Alexis Louder and Toby Huss. She is a lone female officer in the Gun Creek Police Department trying to figure out why bad guys want in her jail. He is a psychopathic assassin, certainly not a “professional.” Put all four in a claustrophobic “Copshop” and let the bullets fly. And, fly they do. Like many modern action films, no one escapes unharmed, lots of blood everywhere. Whatever happened to using our imagination?

Teddy Murretto and Bob Viddick in separate cells, with Officer Valerie Young in the aisle between them, Copshop begins to shine. Slowly, the dialogue reveals the depth of depravity of both. Viddick makes it clear that neither Murretto nor his family have anywhere to hide. Death is inevitable. Squirming, begging, pleading, nothing will help this man with a bounty on his head. Officer Young is confident that she can protect Murretto in her jail, but then a second hitman, Anthony Lamb, appears on the scene. Lamb describes himself to a corrupt police officer, “you kill and you’re a murderer. This is my job. I’m just a laborer.” Lamb gives us some of the best black humor of the year. I give Copshop 3.5 Gavels and it receives a 79% Rotten Tomatoes rating with an early 6.5/10 IMDb score.

On the run from Viddick, Murretto sucker punches Officer Young. No dummy, Viddick fakes a DUI so he can join Muretto in lockup. Initially, Murretto refuses to admit his part in the murder of the State Attorney General. Viddick doesn’t even give his name. Yet, it’s no secret that “John Doe” wants Murretto dead. In a few short minutes, the police department will be under attack. To get out alive, Young must make a choice. Which one will get the keys?

Grillo (Boss Level) and Butler (Greenland) are good as Murretto and Viddick, Louder and Huss border on great. The dialogue previously discussed is so good, it has the feel of a Broadway drama. Louder, seen in Tomorrow War, is that pain-in-the-butt rookie cop (Young) who asks too many questions. She’s definitely not in it for the money. Once Huss (Lamb) enters the police station, Copshop takes it up two notches. A truly evil criminal, you never want him to leave the screen.

One of the production companies co-owned by Grillo is WarParty Films. That seems an appropriate name for the mayhem in Copshop. The early dialogue does the viewer no favors as he tries to figure out who’s who. The dark gray hues of the basement cells adds a sense of foreboding as well as a sense of confusion. Aren’t most modern cells well-lit?

“Any movie that features lines like ‘You look like Tom Cruise in that samurai movie no one watched’ deserves a high five.” San Jose Mercury News

“Copshop is ridiculous on almost every level, but damn if it isn’t a whole lot of fun.” Hollywood Reporter

Please note that I am not the only one who compares all killer-thrillers to John Wick. He’s clearly the baseline. Bottom line: Copshop is fewer kills, better film.