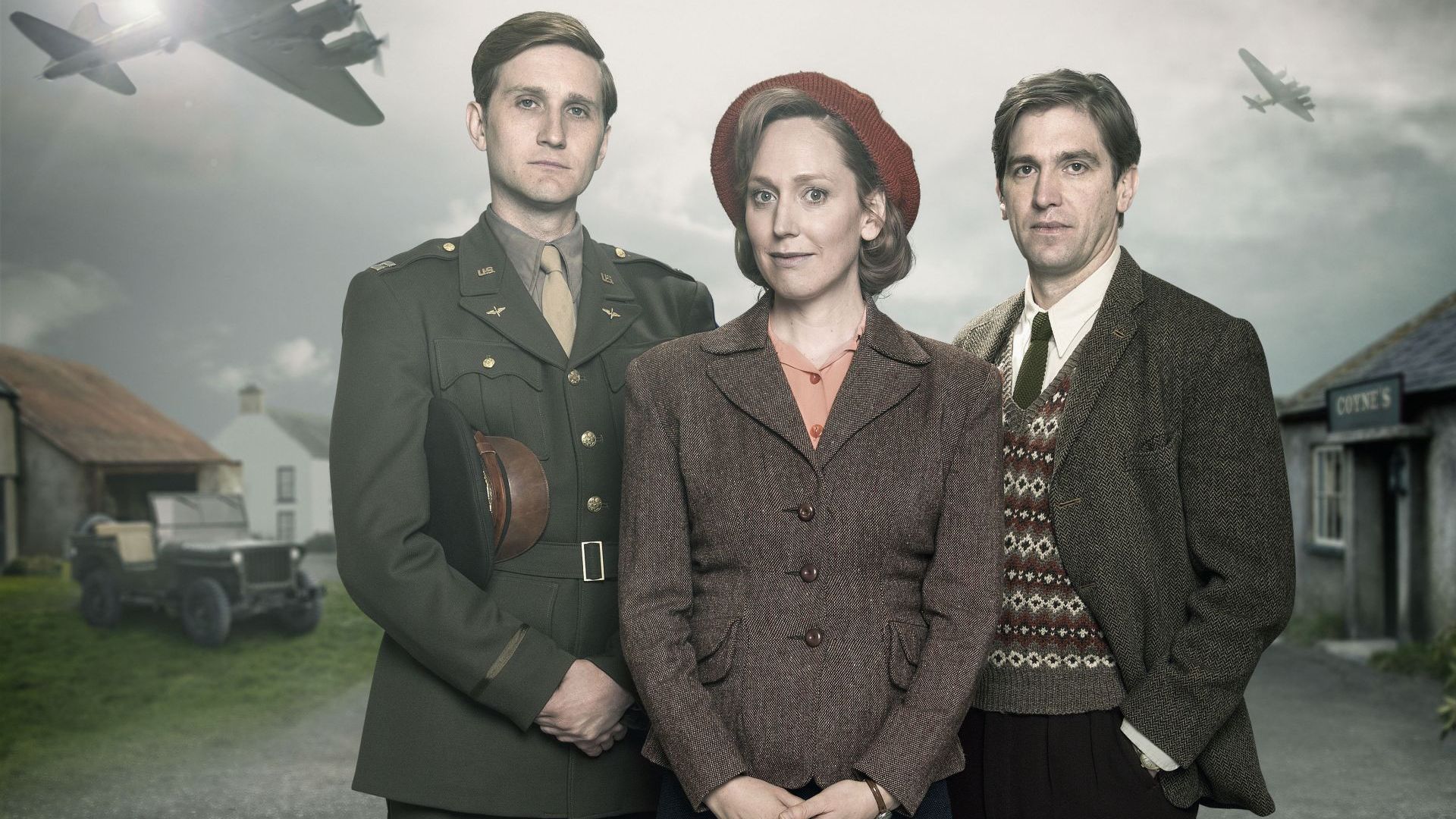 My Mother and Other Strangers sounds like it might be a children’s science fiction novel. Can’t you just imagine Mrs. Coyne performing magic with creatures from another era? Magic, it is, but in 1943 Northern Ireland courtesy of Masterpiece and found on Amazon Prime. The world is at war and the strangers are the airmen and women from America. Nothing could be more foreign to the poor folk of Moybeg. To open a needed airfield, the Hanlon family gets evicted from their homes, occupied for generations. The Coyne family has mixed emotions. To keep the pub running, they need the Yankee dollar. Yet, no one likes intoxicated soldiers catcalling at their women. Two cultures clash.

Well written and acted, My Mother is like fine wine. Sip it slowly and enjoy. This is a slower time and will take a while to sink in its hooks. The only downside is that there is but one season and but five episodes. Rose Coyne and Captain Dreyfus are soulmates and star-crossed lovers. The viewer yearns for them to be together while certain that they mustn’t. The writer says he wanted to create an “exotic love story.” Northern Ireland does not come to mind when you think exotic location. Still, the setting is perfect. Far away from the bustling crowds of London, Moybeg seems so innocent. Where else could a platonic love grow into something so grand? I give My Mother 4.0 Gavels and it receives a 7.5/10 IMDb score.

Brought to Moybeg by her husband from England some 20 years ago, Rose Coyne is still very much a stranger in Moybeg. Happily married with three children, she toils as a teacher and tends to the family grocery store. Life gets turned upside down after an American airman flirts with her sixteen-year old daughter, Emma. Taking on the thugs (read that the Hanlons) who beat him up will not earn her any points with the locals. Then, the American liaison officer, Captain Dreyfuss, shows up to mend fences with the good folk of Moybeg. Not every liaison officer can quote Tennyson. Has Rose just discovered something missing in her life?

The first thing you notice about Hattie Morahan (Official Secrets) are the expressive eyes. The Brits are awash in amazing actors. She makes you ache for Rose Coyne. Best friend of Saoirse Ronan, Eileen O’Higgins (Mary Queen of Scots) actually played that part in the movie Brooklyn. Emma Coyne pines for young Dr. Andrew Black just as much as her mother does for the Captain. American enough to play Wally Schirra in The Right Stuff, Aaron Staton is American enough to play Captain Dreyfuss. You will ask if he is too good to be true!

A blirt in Ireland is an untrustworthy person. Apparently, there are many blirts in Northern Ireland. From October 1943 to Christmas of that same year, the passion heats up even as the war seems far away. Rose expresses her feelings to the Captain with “I am a stranger like you and this is a strange land.” A book, a second glance, and a furtive kiss and a romance is born. How can a husband that does not “fill your inner spaces” compete with the handsome, poetry-loving stranger?

“My Mother and Other Strangers, written by Barry Devlin, is beautifully filmed, and, like so many Masterpiece .productions, it certainly offers transport to another time and place.” Boston Globe

“It’s in the classic tradition of offering a child’s eye view of adult events, evoking a sense of wide-eyed wonder tinged with a gradual loss of innocence.” Radio Times

If you like Masterpiece, this will likely be your cup of tea. The first few episode are more of a slow burn, but the arrival of Rose’s sister heats things up quickly. Nurse Tillie is a nice touch, too.