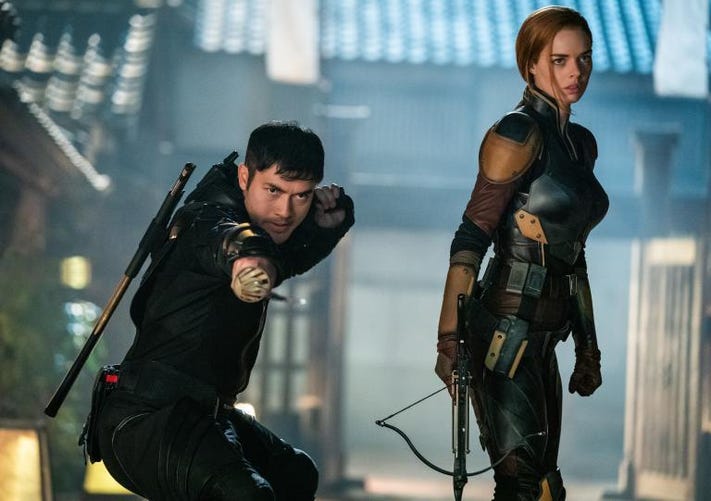 Snake Eyes: G.I. Joe Origins is not your father’s “WWII G.I. Joe.” Snake Eyes could be “Crouching Tiger, Hidden Dragon Joe” except Japanese. So, let’s bring everyone up-to-date. The G.I. Joe: A Real American Hero toyline gets introduced by Hasbro in 1982. Later, in the Marvel comic book, the team’s official codename is Special Counter-Terrorist Unit Delta. Snake Eyes is one of the original, and most popular, members. In re-booting the G.I. Joe series, we now find out how Snake Eyes came to join Scarlett O’Hara and the others. Just remember, at least until he cleansed his heart, revenge drives our hero.

Although the primary story finds Snake Eyes recruited into the secretive Arashikage clan to join his blood brother Tommy (later arch-enemy Storm Shadow), the film also introduces strong female characters Scarlett, the Baroness (second in command at COBRA), and Akiko (security leader for the Arashikage). And, it’s not often that a grandma, head of the clan, gets to show off her Ninja skills. Finally, what story set in Japan would be complete without the Hard Master and the Blind Master. In a film filled with action sequences, you get your money’s worth from Snake Eyes. In a sparsely attended opening night, one wonders why it chose to compete with the Olympics. Is this some sort of Tokyo tie-in? In any case, I give Snake Eyes 4.0 Gavels and it receives a 43% Rotten Tomatoes rating and an early 6.1/10 IMDb score.

At age 10, he watches his father murdered in front of him. Twenty year later, he’s fighting for pocket money when recruited into the Yakuza by Kenta. To prove his loyalty, he must kill infiltrator Tommy Arashikage. Refusing, Snake Eyes and Tommy fight their way out to escape to the “castle” in Japan. The Arashakage protect the gem, sought by both the Yakuza and COBRA, which gives great destructive power to whomever possesses it. Can Snake Eyes be trusted to be a member of the clan? Or, will his drive for revenge cause him to turn his back on his new “family?”

With Crazy Rich Asians, A Simple Favor, and Last Christmas, Henry Golding should be well-known to you by now. With his anger always boiling just beneath the surface, he gives an impressive performance as Snake Eyes. Trained in the martial arts, Andrew Koji brings his skills to the screen as Tommy. You may know her from the Netflix series Money Heist, Ursula Corbero makes a delightfully wicked Baroness. The good guys (gals) get equal representation by Samara Weaving (Hollywood) as Scarlett. We get a taste of both, but their stories are yet to come.

“The martial arts scenes are dynamic and a lot of fun, with split-second timing and astonishing skill.” Movie Mom

“Snake Eyes is just entertaining enough, but often very flat and 90% of the action is over-edited and shot with an extreme form of shaky cam – so shaky it’s nearly impossible to appreciate the stunts and choreography.” Perri Nemiroff

Typically, I’m not a fan of the hand-held camera, “shaky cam,” if you will, but I did not find it distracting. Overall, I’m ready to learn more about the G.I. Joe universe. Isn’t that the purpose of a film? Of course, you will always have the nay-sayers:

“Snake Eyes: G.I. Joe Origins is probably about as good a movie as you’re going to get that has the words ‘G.I. Joe’ in the title.” Variety

“As shamelessly corporate popcorn movies go, Snake Eyes is better than most. That’s not high praise, but considering the film’s dopey pedigree, it’s not nothing.” Hollywood Reporter

Hey! Give the guy a chance. He’s just getting started. The Kishiwada castle, moat and all, reminds me of the Forbidden City in Beijing. If nothing else, it will impress.