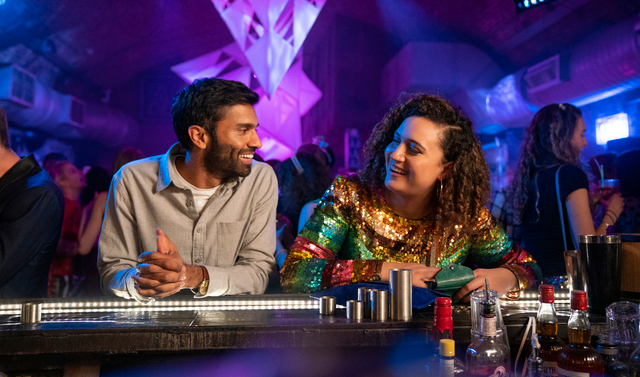 Is a 100% Rotten Tomatoes rating for HBO’s Starstruck an indicator it’s time for us to lower our expectations for a comedy? A Ted Lasso would say no! On the other hand, Dad Stop Embarrassing Me! and Netflix’ Good on Paper lean a hard absolutely. Both Jamie Foxx and Iliza Shlesinger can do great work, but both of the aforesaid comedies were downright embarrassing. At times, Starstruck can be tender, quirky, and sweet. Although not as bad as many, it can then turn on the raunch and unnecessarily discuss body parts and functions best left unsaid. If not familiar with her work, Rose Matafeo is a New Zealand comedian. One of her HBO specials is named Horndog in which she talks about her boyfriend. A Ted Lasso might advise her to save the “horndog” for the comedy specials.

Jessie seems to be the envy of every female in London. No, she’s not a perfect 10. Far from it. As she leaves her lover’s flat in the early morning, the paparazzi are certain she is just the cleaning lady. Who is her lover? None other than Tom Kapoor, famous movie star. Still, the attraction is apparent. But, forces conspire to keep them apart. Tom’s agent tell him “there is a reason that actors date other actors.” And, Jessie’s best friend reminds her that “he’s famous and you are a little rat nobody.” Jessie replies “harsh, but true.”

Starstruck follows this “relationship” as it sputters from New Year’s Eve to the following Christmas. In a quick six episode (22 minute each) series, the viewer gets an idea if they want to hang around for a just renewed season two. I give Starstruck 3.5 Gavels and it receives a good 7.7/10 IMDb rating.

It’s New Year’s Eve and Jessie is a third wheel to best friend, Katie, and a boy she just met. At the bar, she meets Tom, gets drunk, and shares a cab to his flat. The next morning, Jessie discovers that Tom isn’t just Tom. He’s Tom Kapoor! Surely, she will never see him again. By Spring, chance brings them together. Circumstances keep them apart. Repeat for Summer and Fall. Does Tom really need an Australian accent coach or is that just an excuse to call Jessie? Is Jessie really any competition against his co-star, the lovely Sophie?

Did you recognize Minnie Driver (Circle of Friends, About a Boy) in the above picture? Although active on TV, it’s been awhile since she’s been on the big screen. Here, she has a bit part as Tom’s agent. Nikesh Patel (Artemis Fowl) is the actor who keeps Starstruck grounded. Tom is a genuinely nice guy completely unaffected by his stardom. He plays off nicely against the slightly neurotic, “difficult,” yet ultimately relatable Jessie. She does grow on you.

In the series, Jessie works part-time as a nanny, a bicycle delivery girl, and at the counter in a cinema, sometimes all at once. The disparity in the lives of Tom and Jessie could not be bigger. While she rails against the unfairness of it all, it’s clear that she has a good heart. It’s hard not to root for her.

“”Starstruck often feels like a one-woman show, with a much greater emphasis on the com than the rom, but Matafeo and the dryly funny Patel share the kind of relaxed, banter-y chemistry that makes or breaks shows like this one.” Washington Post

“The writing is sharp and quick-witted, but it can also be warm and cozy, without slipping into sentimentality or cliches.” London Evening Standard

Overall, taking the good with the not-so-good, this one is not-so-bad. It looks like our New Zealand girl may get to Ireland after all.