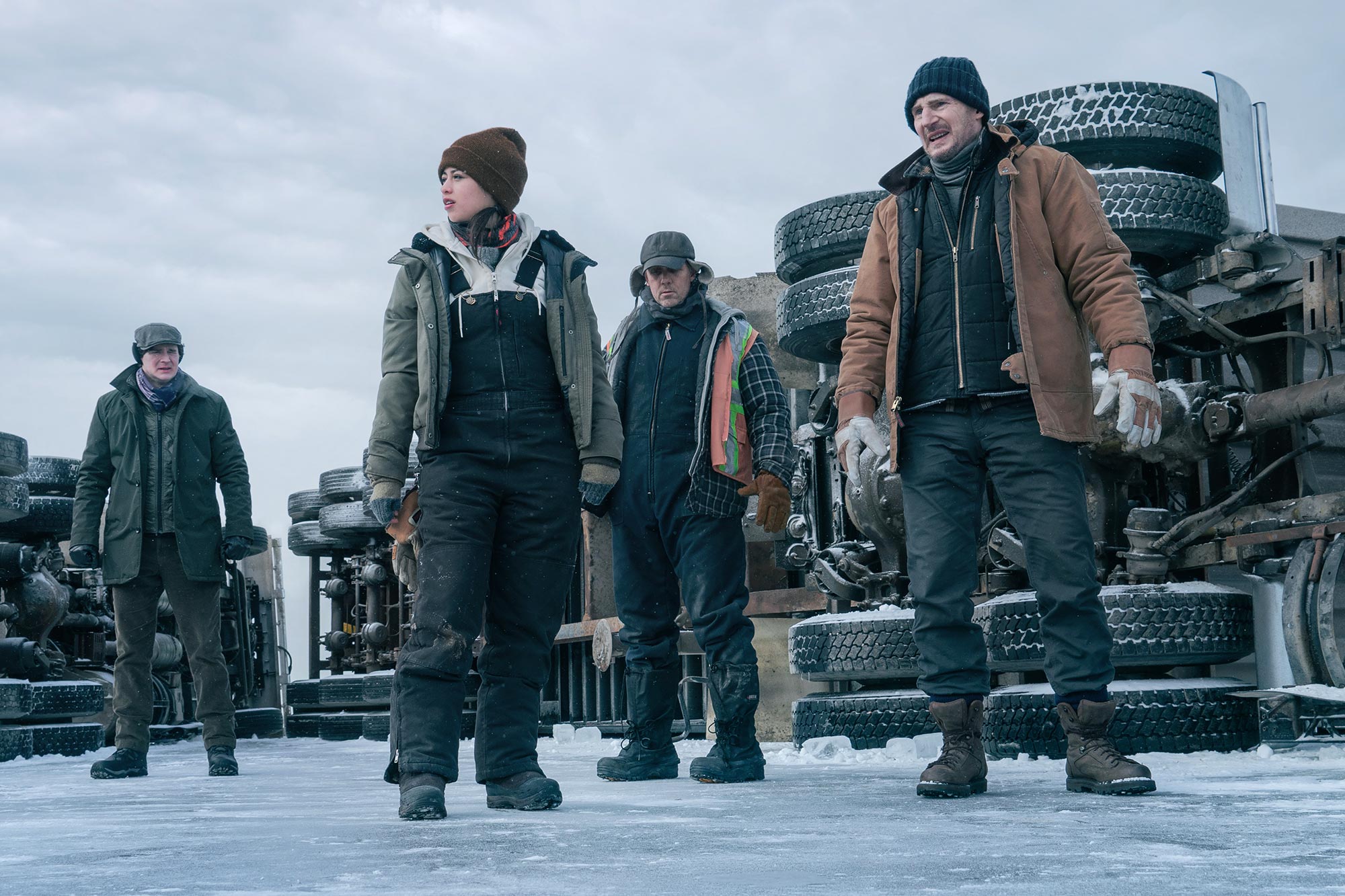 For a much better story, skip The Ice Road and check out the real Ice Road Truckers on the History Channel. Netflix acquired the U.S. distribution rights of the movie for $18 million. Sadly, the film has the feel that its total production costs were about that much. Typically, the director uses music to help create tension. In the case of The Ice Road, it is more of an annoying buzz than any music recognized by man. Sixty nine year old Liam Neeson threatened for years to quit action films. Why didn’t he listen to himself? He finally jumped the shark, or since we are near the Arctic, shall I say walrus? He’s clearly getting too old to wrestle with thugs half his age on the ice or in Kenworths.

One would hope that Kenworth paid a huge fee to place their fine-looking trucks in The Ice Road. I might argue that the film works better as a 108 minute commercial for their company. More to the point, the film might get an award for the longest fight ever in a Kenworth cab in an icy, curvy road without a crash. Believability is not its strong point. Even worse is the time management. At times, our heroes show little urgency even knowing miners are about to deplete their oxygen. Overall, the ice is thin, the acting is thinner, and the plot is the thinnest. I give The Ice Road 2.5 Gavels and it receives a 45% Rotten Tomatoes rating and a poor 5.6/10 IMDb score.

Four hundred thirty two miles south of the Arctic Circle, the Katka Diamond Mine suffers a methane explosion. Twenty six miners are trapped beneath the permafrost. To cap the methane pocket, an eighteen foot, thirty-ton wellhead and 300 feet of pipe must be trucked from Manitoba to the mine in thirty hours. The Ice Road is the only route, but it closed for the season five weeks earlier.

At the request of Canada’s Director of Mining Safety, Jim Goldenrod agrees to lead a team of three redundant trucks if he can find two more drivers and Canada agrees to open The Ice Road. Although she had a prior scrape with Goldenrod, Tantoo agrees to be one of the drivers as her brother is one of those trapped. Recently fired, Mike McCann and brother, Gurty, will man the third. As dangerous as is the ice, it will be the least of their problems.

Liam Neeson (Mike McGann) and Laurence Fishburne (Jim Goldenrod) likely earned the lion’s share of the actors’ pay. Rightly so, as they draw your attention to the film. Yet, it is Marcus Thomas and Amber Midthunder (The Marksman) who catch your eye. Thomas plays Gurty convincingly as an Iraq War vet who suffers from aphasia. Also seen in Hell or High Water, Midthunder is Tantoo, a Native with a chip on her shoulder. She gets the best line in the movie. When told that she will get arrested again if she keeps protesting, Tantoo responds with “I’ll stop when you get off our land. And, I mean North America.”

For the insurance agents out there who think that they are always portrayed as bad guys or dweebs, I give you Six Movies Every Insurance Agent Should Watch. Sorry, but in the form of Varnay, you get to be the bad guy in The Ice Road. If it makes you feel any better, he does have the proverbial nine lives.

“Despite its many perils, both natural and human, The Ice Road is surprisingly dull. It’s definitely not as crazy as it should have been, given the setting and the stakes.” RogerEbert.com

In the end, the viewer can’t help wondering how much better this one would be in the hands of Vin Diesel and his F9 crew. Remember the submarine scene in F8? The Ice Road is a very poor man’s cousin to the stunts in Fast and Furious.