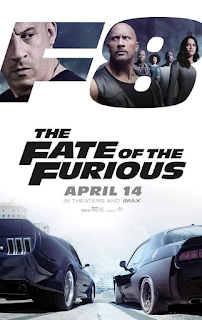 I have secretly placed a subliminal message in the opening paragraph which I hope you will be able to ascertain.  It is about as subtle as this movie. F8 is as loud and outrageous as you can imagine, at least until F9.  Every time you think you have seen everything. . .  I lost count but I think they kill as many vehicles in this movie as John Wick does bad guys.  F8 presents Charlize Theron as Cipher who blackmails Dom into joining her team and stealing weapons.  In doing so, Dom must turn his back on his “family.”

Theron is getting lots of practice at being the bad guy (see Queen Ravenna in the Huntsman series).
Vin Diesel is still the worst actor in the world.  Of course, Tyrese Gibson and Ludacris Bridges are not much better.  At least Scott Eastwood, Kurt Russell and Helen Mirren seemed to realize that acting skill was not a prerequisite to be in the movie. The Rock Johnson and Michelle Rodriguez seemed mildly interested.  Actually, the best part of the movie was any time Jason Statham was on screen, especially as the “guardian” of the cute kid.

But the point of this billion dollar franchise is not to get nominated for Oscars, it is to make money. You would think that fast cars, beautiful women, and muscle-bound men would only get you so far in life–and you would be wrong.  Vin Diesel, to his credit, does a great job in ensuring that the “theme” stays fresh by utilizing bigger and badder stunts, dialogue be damned.

The movie is fifteen minutes too long, or maybe 2.25 hours too long if your not into the “theme.” Still, as action movies go, you get your money’s worth.  Some are projecting that this series is becoming like James Bond and will go on for years to come.  They are making enough money to afford better writers.  The big question is whether they are making enough money for acting lessons for Vin Diesel–that will take lots of money!

6 thoughts on “The Fate of the Furious 3.5 Gavels 64% Rotten Tomatoes”