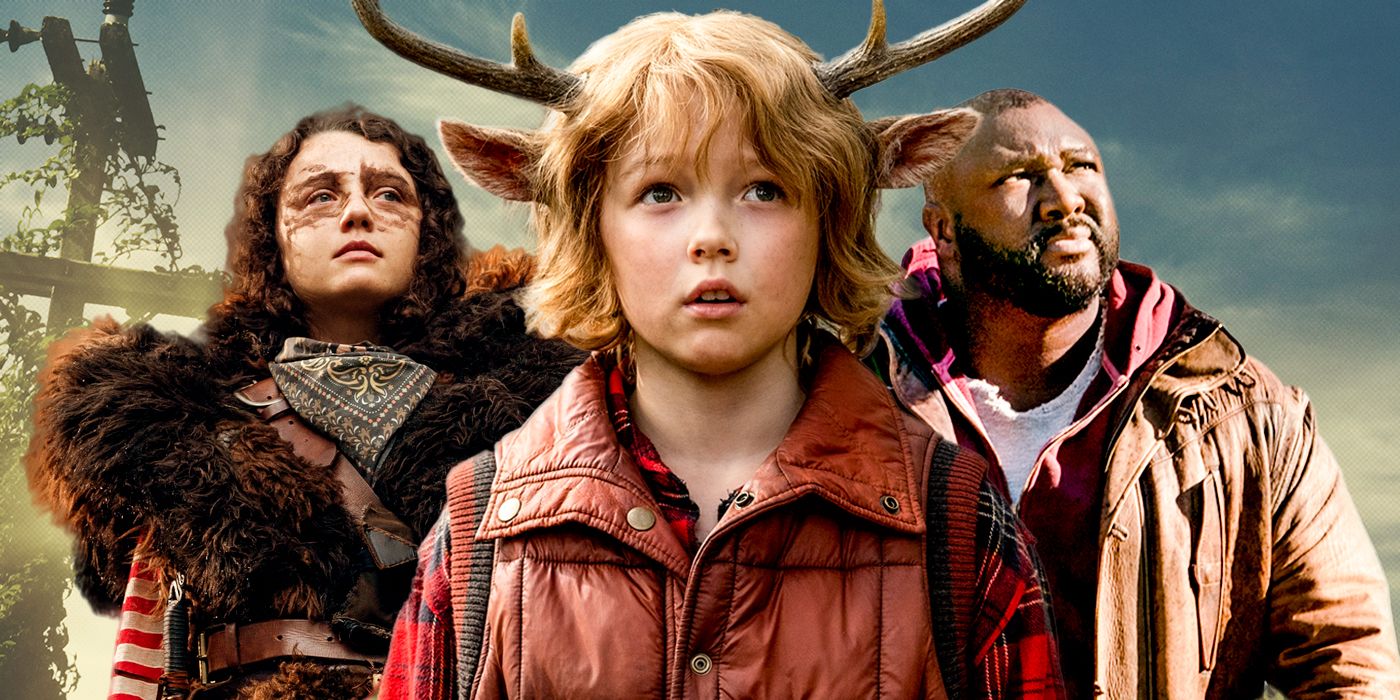 Despite my best efforts, it’s hard not to like Sweet Tooth. Apocalypse stories are way down on my list of preferred genres. The H5G9 virus is just a little too close to COVID-19 for comfort, killing millions and causing lockdowns from a laboratory leak. Do I really want to re-live 2020? In the TV series, the question everyone asks is which came first, the virus or the hybrids? Now that conspiracy theorists know Sweet Tooth is based on a comic book series originated in 2009, which came first, COVID or Gus? Besides, after eight episodes on Netflix, I needed a better ending, not a Season 2.

Even so, wonderfully innocent Gus, and large, guilt-ridden Jepp make the best of road buddies. On their way to Colorado to find Gus’ mother, Gus sees everything for the first time, wholly different than he could imagine. Jepp wants so badly to see that Gus doesn’t get hurt, but knows pain is around every corner. Gus is that “little dude who has hope coming out of every pore.” Jepp has seen the ugliness of human nature and wants to see no more. Can this odd couple survive General Abbott and The Last Men determined to rid the world of the “vermin” hybrids? If it all sounds kind of weird, it is, but yet also done very well. I give Sweet Tooth 4.0 Gavels and it receives a near perfect 98% Rotten Tomatoes rating with a very good 8.2/10 IMDb score.

The H5G9 virus began to spread slowly ten years ago. Known as The Great Crumble, society collapsed as the deadly virus spread. As it spread, all children born were hybrids, part human, part animal. To protect him from those who blamed the hybrids for the virus, Pubba took Gus to live in the wilds of Yellowstone National Park. At Pubba’s death, Gus finds information left by his father that his mother, Birdie, may still live in Colorado. Yet, if he ventures outside the fence, death is certain. Jepp stumbles upon two men about to kill Gus, saves him, but has no interest in being his caretaker.

Meanwhile, Dr. Singh tries to keep his wife alive as there is no cure for The Sick. Bear forms the Animal Army, a group of adopted kids determined to protect hybrids from The Last Men. Aimee forms a preservation for hybrids at the Essex County Zoo. General Abbott intends to make an example of her and exterminate the hybrids. The hunt is on.

Now eleven, by my count, Christian Convery (Playing With Fire) already appears in 28 movies or TV Shows. As Gus, his naivete has such magnetism. It’s a long way from Artemis Fowl and playing Idi Amin in 7 Days in Entebbe for Nonso Anozie. Still, it’s hard to imagine a better casting for Tommy Jeppard, former pro football player, former Last Man member, and a man full of regret. It’s early, but both Convery and Anozie should receive Emmy mention. Bear and her Animal Army rescue Gus and Jepp during their travels. Stefania LaVie Owen (Messiah) gets that part and joins the pair on the trip to Colorado.

The messages of “people hate you because you are different” and “hybrids are how the Earth can start to heal” do become repetitive. That hybrids are the “secret sauce” in experimentation for The Cure might be tough to explain to the younger set, thus the PG-14 rating.

“The performances are strong throughout — Anozie is particularly remarkable — but it’s the consistently inventive writing and robust filmmaking that makes the project stand out.” RogerEbert.com

“Emotionally and geographically, this is a show with real epic scope, and it earns the laughter and occasional tears that it wrings from the audience thanks to a real and unquestionable, well, sweetness.” Hollywood Reporter

I much prefer my season series to give me some sort of conclusion. Sweet Tooth leaves more questions unanswered than it answers. Nevertheless, Gus and Jepp leave you wanting more, just like candy.