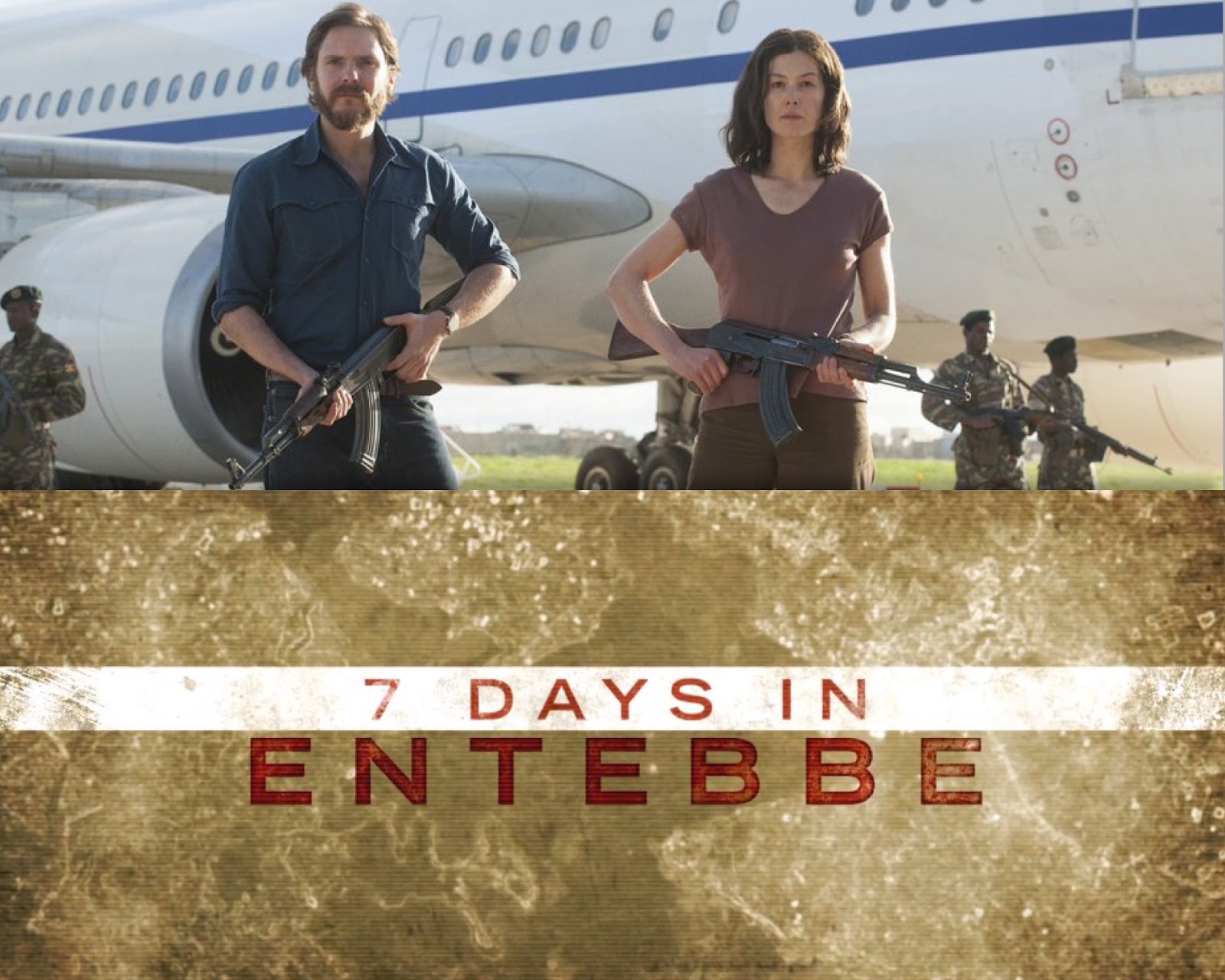 Referred to as a “crime thriller,” 7 Days in Entebbe is more aptly described as a psychological thriller.
Very little of this tale focuses on the hostage rescue itself , but rather the seven days of “what do we do now.”  Two German radicals, Kuhlman and Bose, are certain that the Israelis will be forced to negotiate, notwithstanding Israel’s longstanding policy of not negotiating with terrorists.  Next, throw  some Palestinian hijackers into this mix who have nothing to lose, and are not adverse to killing hostages.  Finally, add a crazy Idi Amin, President of Uganda, into this group, and nothing is predictable.

It is 1976 and an Air France airplane is hijacked with 250 passengers aboard.  It first landed in Libya but Muammar Gaddafi refueled it and sent it on its way.   Kuhlman and Bose are sympathetic to the Palestinian cause and are coordinating with complicitors already in Uganda.  Yitzhak Rabin is prime minister of Israel and wants to negotiate, even though he know it is political suicide.   Shimon Peres is his Minister of Defense and continually prods Rabin to try this very risky rescue.  The living conditions at a vacated Entebbe airport terminal are bad and Jews are separated.  A deadline is given and Amin says the children will be the first to die.

Rosamund Pike is Brigitte Kuhlman, the latest example of using an English actor, well known in America for box office purposes, even though the accent is HORRIBLE.   Daniel Bruhl is Wilfried Bose, properly conflicted about whether he is a terrorist or a freedom fighter.  He gives the impression that someday people might recognize him as a hero.  Lior Ashkenazi is Rabin who comes across as someone who hopes he doesn’t have to make a decision.  On the other hand, Eddie Marsan, as Peres, sees the world in black and white.  He will have no trouble in deciding what to do next.  Nonso Anozie is Amin.  He would almost be comical if his character wasn’t so unstable.

Time magazine has a good article by Kate Samuelson dated 3/16/18 entitled The True Story Behind the Movie 7 Days in Entebbe.  As always, liberties were taken.  As you explore this story, remember that Benjamin Netanyahu’s older brother was the only Israeli soldier killed in the rescue.  It certainly has to affect his view of Israeli-Palestinian relations.  In giving advice about this movie, don’t go see it if you are expecting an action movie.  Don’t go see it if you want a movie 100% historically accurate.  Yet, this movie does a good job of setting forth problems as they existed at that time.  You even see Walter Cronkite and David Brinkley reporting on the incident.  It is a fair criticism that there is too much angst without giving any answers, but that seems too simplistic.  If there were easy answers, we wouldn’t still be dealing with the problem today.  As you leave this movie, you will ask yourself why Bose and Kuhlman acted as they did at the end.  No hints here!