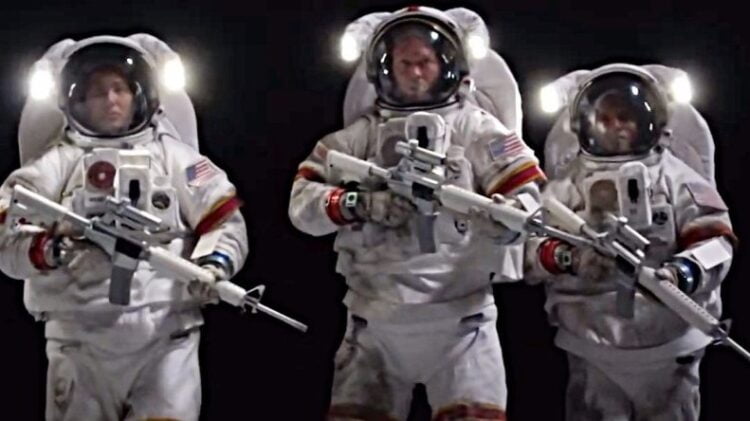 For All Mankind 2 teases “We come in peace,” so why the guns? In this alternate reality series, those pesky Russians take over a moon site claimed by the Americans. As General Bradford says, “the only way to hold a piece of ground on this world or any other is a man with a gun.” NASA knows that in any crisis the military swoops in and takes control. Is NASA about to become an arm of the Pentagon? What about the goal of reaching Mars within 10 years? President Ronald Reagan likes his astronauts, but defense must come first. The Cold War is about the hit the freezing point.

Lest you think For All Mankind 2 is about conflict on the moon, seven of the ten-part AppleTV+ series is more about the relationship of the characters back on Earth. Those episodes, interspersed with moon shots, receive a fine 7.8/10 IMDb score. But the other three, with intense US-USSR confrontation, garner excellent average 8.9/10 IMDb scores crescendoing to a near perfect 9.7/10 IMDb score for episode ten. In other words, stay with this one until the end. For All Mankind 2 has the best final episode in a series seen in quite some time. Plus, you get a hint that Season 3 takes us to Mars in the year 1995. I give the show 4.0 Gavels and it receives a 100% Rotten Tomatoes rating.

By May 21, 1983, the Jamestown colony on the moon is well-settled with Commander Ellen Wilson in charge. Astronaut Molly Cobb leads the exploration of site Bravo 357 which holds extensive lithium deposits. Director Margo Madison closely watches over a multitude of launches as a new nuclear powered shuttle, the Pathfinder, is about to come on-line. Even though the Russians can’t be trusted, could an Apollo-Soyuz docking defuse tensions? An unexpectedly large solar flare is just the first event that shows the dangers of space. But, are the dangers of man any less problematic?

Although entitled For All Mankind 2, by my count, eight of the top ten characters are female. After playing Jackie Kennedy in The Crown, Ellen Wilson (Jodi Balfour) remains in the same era as the competent NASA Administrator. If only her private life were this easy. Director Margo Madison (Wrenn Schmidt) continues to solve every problem, engineering or otherwise, the boys put in front of her. Karen Baldwin (Shantel VanSanten seen in The Boys) runs The Outpost, the local watering hole for astronauts. Her husband, Ed (Joel Kinnaman), is the Chief of Astronauts. The selection process is about to turn her life upside down.

To get the flavor of this series, you should watch For All Mankind first. You miss too much background, and historical “corrections,” if you try to slide into season two. Sidelined after an incident on the moon, Molly gets the offer to run the Astronaut Office. At first skeptical, she reconsiders after hearing about “homage to the favor seekers, vengeance to those who crossed you.” Even if “space, the final frontier,” is not your genre, you should watch an underwater launch from Guam. The photography is simply fantastic.

“It’s bona fides stem from many corners – terrific production design, visual effects that might be TV’s best, stellar performances from a beautifully chosen ensemble cast – but its overall quality can also be traced back to its showrunner Ronald D. Moore.” Vox

“As with the first season, what works best in this series is the angle of reimagining the past.” Entertainment Voice

To paraphrase, “Houston, we have a winner.” Here’s to yet another successful launch.