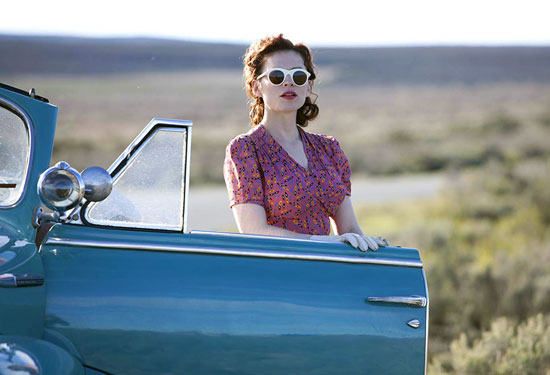 During War Week, what could be better than a spy thriller? Restless brings us the story of the BSC (British Security Coordination), an actual covert operation set up to influence American opinion prior to WWII. Based on a 2006 novel, add a daughter who finds out that her mother was of Russian birth and a part of that organization. Thirty years after the war, is someone trying to kill her mother, and why?

Restless (2012) is yet another TV series well-done by the Brits. In two-parts (total three hours), one goes from Paris to London to Belgium, on to New York and Washington D.C., then Albuquerque and Las Cruces, and even Canada. These spies get around. Watching the film, one could only dream of driving these beautiful old cars. Still, with factual historical background, this tale of betrayal and revenge is well worth your time. I give Restless 4.0 Gavels and it receives a 7.1/10 IMDb rating.

After her brother is killed by German agents in 1939 Paris, British spy Lucas Romer recruits Eva Delectorskaya to his cause. With solid instincts, she impresses her espionage trainers. Oddly, she receives no firearms training as her “duties” require no need of it. As her job changes from the office to the field, she soon finds out that she may have to kill, or be killed. Years after the war, her instincts tell her she must recruit her daughter, Ruth, to survive. Ruth is in for a big surprise!

If you don’t know her work, at age 38, Hayley Atwell already owns three Laurence Olivier Award nominations. From Captain America and Avengers to Howard’s End and Christopher Robin, she is a go-to actress. Ms. Atwell is the young Eva aka Sally Gilmartin while the equally fascinating Charlotte Rampling (Red Sparrow) is the elder Eva. Michelle Dockery of Downton Abbey fame is the perplexed daughter Ruth. Famous for his role in The Man in the High Castle, Rufus Sewell is the “Don’t Trust Anyone, Not Even Me” spy, Lucas Romer.

Romer tells Eva “there are three reasons a man will betray his country: Revenge, Money and Blackmail.” To try to get information from the White House, Romer is not above using the lovely Eva to blackmail a high ranking official. Given the quality of Restless, it startles that it received no award attention.

For example, The Hollywood Reporter wrote “the premiere is the stronger of the two episodes, but all of Restless is excellent. The first part sparkles as Eva, at first wide-eyed, blossoms with her training. She’s a natural.” The LA Times adds “for a nation bewitched by period dramas in which men wear hats and sip whiskey while making eyes at crimson-lipped women who smoke an endless succession of unfiltered cigarettes, the Sundance Channel miniseries Restless offers all that and more.” Have some fun and learn a little about our history, it’s a win-win.